Book Review - Janaka and Ashtavakra: A Journey Beyond 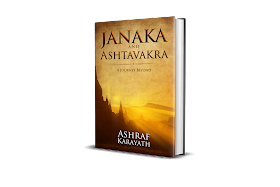 
Ramayana is one of the two epics which is considered sacred among the Hindus. It has been interpreted in so many ways from time to time. Though it is revered by Hindus, the book offers worldly knowledge which is applicable to all, across the globe.

Since I have said that there are hundreds of editions about Ramayana in various languages, you might ask as to what makes this book special? The answer is this - this book highlights only two characters in particular - Janaka and Ashtavakra.

I would say this book has brought out a different dimension of approach to the Epic. While most of the earlier releases has always concentrated in the entire story, this book discusses in detail as to what had happened in the Kingdom of Mithila prior to Lord Ram marrying Goddess Sita. I found this approach unique and refreshing. I also felt that this book is no lesser than the previous interpretations and in fact made this even more interesting and appealing.

While King Janaka was plagued with lot of issues including the hindrance of Tataka and her son Subahu apart from neighboring King's secret plans to invade the Kingdom and capture it, the delay of marriage of his beloved daughter Sita makes him more sad. On top of this, when there was an accusation among his trusted aides, he was left with no choice as to who is loyal - his trusted army leader or his own brother who made a grave mistake costing 200 lives earlier.

While he was in such a chaos and utter confusion, he gets an unusual visitor. He is none other than Ashtavakra.

Who is Ashtavakra?
What was his purpose of visit to Mithila?
Did he solve the impending crisis that was looming over Mithila?
Did King Janaka able to come out of his confused mindset?

Read this book which would keep you captivated till the end and opens up a different dimension to the Epic, which I am sure, would be appreciated by you.

I would rather call it that this book is the "Interpretation that perfectly corresponds to 21st Century" and would hold good for few more decades, if not more.

This book is available on Amazon in both Paperback and eBook formats.
Sarath Babu at 09:36
Share