Book Review - I Tagged Her In My Heart 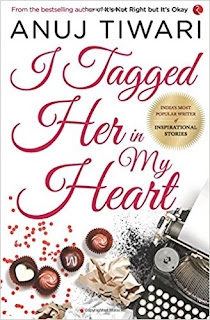 
A beautiful novel based on real life incidents(as claimed by the author)and I feel this is the life of the author himself since his description in the beginning and the story aptly coincide with each other. The story revolves around 5 main characters nick named VAADA though the nick name is revealed only in the end.

The story is about the life of 4 friends Arjun, Adrika, Anushka and Ved. Anushka alone was a year senior while the other three studied together. The story talks in a very subtle way as to what transpires in their life which includes Love, Relationship, Friendship among others.

What I liked the most is the way author has described the story line which was clear and crisp which would catch your attention from the beginning till the end. The disappointments faced both by Arjun and Adrika makes them emerge stronger later. Initially I thought Arjun had a crush over Adrika but later I realised it was incorrect. On the other hand, he had crush on Anushka.

What happened in their lives?
How did Arjun and Adrika emerge successful?
What did they do?

Read the story which is a complete different plot (which I can certainly vouch after having read few hundreds of novels). I liked it. I am sure, as a reader, you would like it for sure as well....


The book is available on Amazon
Sarath Babu at 17:10
Share