When a Fan met his Idol

We all have someone in our life who we consider as our idol. It differS from person to person. I too have a list of few, who I admire the most. When it comes to Literature, it is Ashwin Sanghi, I idolise. 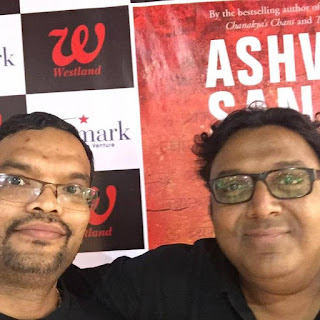 I have been fascinated after getting to know about his initial days where he had struggled a lot since his very first script was rejected by 47 publishers. Hardly they knew that they were letting go the golden opportunity that came knocking on their door. Ashwin did not lose his hope. He went ahead to publish his story on his own(which is what most of us do these days). Even though it had a dull start in the initial stages, it did pick up later on. He came under the spotlight of Westland Publications and the rest they say is, History.

I have read all his books from the Bharat Series including his latest fictional thriller The Sialkot Saga. I was so crazy about his stories that I almost ended up pre-booking it. His understanding of the subject is really mind blowing and you will hear about it from the man himself in the later session.

When he announced that he would release a Crime Thriller along with World's Leading Crime Thriller writer - James Patterson, my joy knew no bounds. The book "Private India" was the ultimate. He then went ahead to release his non-fiction under 13 Step Series which was titled "13 Steps to Bloody Good Luck". It was again mind-blowing and when he announced a contest, do I need to say that I took part in it? I went ahead to even win the contest as well and now I am one among the 13 winners who is waiting for our story to be published in his anthology.

I have always read his books as soon as they got released/published and have written reviews on my other blog which I have shared it with the author himself. He has liked it and interacted with me online.

When I got to know that Ashwin Sanghi will be in Chennai, I immediately asked him for his consent to get his autographs on his books. He agreed to autograph all his books kindly. After a while, I asked him whether I could do a short interview with him. He did not reply. I thought he might have overseen it or would have forgotten about it given his commitments. The day did come. It was 29th July 2016 and as per the press release, Ashwin Sanghi is suppose to be there in Starmark in Express Avenue at 6::30PM. I did start early that day as I could not contain my excitement of getting his autographs. When I reached the venue at 5:30PM, I was surprised to see Ashwin Sanghi who has reached the venue early. I went ahead to get myself introduced to him.

What happened next was completely unexpected. Ashwin Sanghi recognised me. He even went ahead to say that he remembered me of wanting to have a short interview with him. He asked me to interview him.Yes!!! Imagine how a fan would feel when his/her idol asks them to do an interview?

To be frank, I wasn't prepared for this. I was on a utter shock with a mixed feelings. I somehow managed to interview him. As I am unable to embed the video here, I am giving you the links. Check what Ashwin Sanghi has to say about few interesting things.

Ashwin Sanghi talks about his upcoming books - Books and More

What more can I ask for? Thank You Sir for being so humble and kind enough to give your Autographs on all your books along with a Selfie. My Lifetime Wish got fulfilled :-)

Sarath- I'm sure you would have got goose bumps on your first meet with Ashwin Sir. I read his interview which came in "The Hindu" yesterday. Even I was impressed by the man and his will to stay with writing inspite of the rejections in his earlier days. If he would have thought otherwise, we would have missed a good writer. Your feelings has come out well in the above article. Hope you enjoyed the fan moment. I'm glad that one of your wishlist got fulfilled. Feeling happy for you my friend