Book Review - The Last Avatar : Age of Kalki I 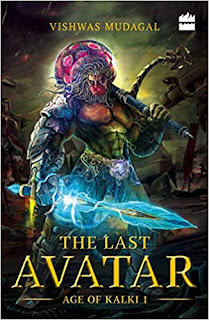 This is a novel which would be close to my heart as it has the fusion of myth and technology. Firstly, I was impressed with the cover - which shows the mighty Hanuman, the Vanara God in a Sci-Fi format. Hats off to the creative team who has designed this. The cover page has evoked interest as sn as I saw it. Then the title - "The Last Avatar : Age of Kalki I". As per the Hindu mythology, Lord Vishnu is believed to come back to Earth in the form called "Kalki" when there is a spurt in the misdeeds, treachery, corruption, scam and other unwanted things.

Coming to the story. The story revolves around the protagonist Neel who is also known as Kalki. He heads the Astra Group which manufactures some out of the world technological equipment which were way ahead of his period.  He was also known to have mastered so many arts which makes him near invincible. This is proved when he gets captured by the Chinese Intelligence Agency wherein despite of being tortured for weeks and being injected with truth serum, he never utters a word. He also seems to have recovered three times faster than a normal human being when he was being hit.

Is he the reincarnation of Lord Vishnu?

The author has touched upon geo-political situation and has introduced a terrifying character called Master Zar who runs the terror outfit called Invisible Hand and has weaved a story as to how it join hands with few others to bring the world to their knees.

There was another major incident which happens in India where the entire Parliament gets blown up which kills all the MP's in one go including the Prime Minister and Ajay Pradhan becomes the Head of Indian High Command(IHC) which along with Army General and Head of Navy and Air Force along with the IAS officers starts administering the Country.

General Jian revolts against his father Wang and leads a coup to capture the power. He wanted to capture Shen and Nushen who were known as Homo Supernus who is believed to have some super powers.

Were they Humans or Aliens?

Then there was this secret place called Shambala which is believed to be protecting the scriptures of God which were safe guarded by Rudras.

The story revolves around various places and characters and there was a flashback for Neel which was not a good one to recall/remember for him.

What I liked the most are the final two chapters.

Yes. Neel challenges the mighty Chinese Army all by himself in the border and when India was about to surrender its border, something unexpected happens.

The climax (which isn't the end of the novel) is surreal and it would make anyone who reads it to wait eagerly for the release of the sequel. I am no exception.

This book is available on Flipkart, Amazon on both Paperback and eBook formats.