What is the hottest topic of this year?

It is undoubtedly the US Elections. This election will decide as to who would sworn is as 45th US President since Barack Obama is completing his 2 times Presidential tenure on 20th January 2017.

This election gained importance because of two candidates  Hillary Rodham Clinton and Donald Trump. While Hillary Clinton was the ex-first lady of the US , Donald Trump is a business tycoon who has made his fortune in real estate and casinos. The first ever woman candidate who stood in the US Presidential elections dates back to 1872 when Victoria Woodhull has been nominated by Equal Rights Party and ever since there were a total of 36 nominations excluding the present nomination of Hillary Clinton.Interestingly, not even a single time did a woman candidate win to become the President of the United States. 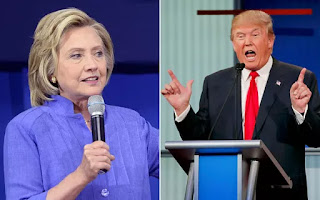 Who is backing Hillary Clinton?

Hillary Clinton who is been nominated by by the Democratic Party has got the support from many influential people which includes the likes of Katy Perry, Beyonce, Lena Dunham, Sarah Silverman, Lee Daniels, Meryl Streep, Lady Gaga, Elizabeth Banks, Amy Schumer, Kerry Washington, George and Amal Clooney, Robert De Nero, Kim Kardashian, Magic Johnson, Justin Long, Pharell, Salma Hayek etc is backing Hillary Clinton and surprisingly Bernie Sanders who was in race for the Presidential nomination and lost has also pledged his support for Hillary.

Most importantly, Hillary has also got the support from the Asian Americans who form a considerable numbers especially that of Indians.

Who is backing Donald Trump?

Comparatively in this phase, Hillary Clinton leads the race with regards to the funds being raised to support the campaign. A staggering USD 1.1 Billion has been raised so far with Hillary Clinton leading the list with close t USD 517 Million followed by Donald Trump at a distant second with USD 206 Million. This shows as to who has got the massive support from Rich and Elite.

While Hillary Clinton has been plagued by email gate scandal, Donald Trump has got hit by his various actions including passing inappropriate comments on women, other religion. He even thundered in one of his meeting/debate that he would get rid of Muslims from his country, if he is elected and would make "America for Americans". Most recently, he got into more trouble where the recent taxes records showed that he probably could have avoided paying taxes for 2 decades after declaring a USD 916 Million Dollar loss during his 1995 tax returns. Despite this, he has challenged one of the most revered businessman and known for his philanthropy, Mr Warren Buffet to declare his returns for which Mr Buffet has answered claiming that he has paid all the taxes till date as per the U.S  Tax Rules.

Who is Good and Who is NOT so Good?

Again, this is something which can only be answered by the U.S Residents during the elections. Hillary Clinton has the exposure to Politics in her various roles like First Lady, Secretary of State and is known for her negotiation skills. She also plays a crucial role in Clinton Foundation. She holds a Juris Doctor from Yale Law School.

Donald Trump who claims to be a self made billionaire, keeps getting entangled into controversies and his instability when it comes to taking a decision may prove to be a dampener for him.

While Hillary is known for her negotiation skills and believes in talks rather than action, we may not expect the same from Trump who believes in action(war). Trump has also mentioned that he would stop outsourcing and bring back all the business back to America.

While Barack Obama became the first African American to hold the post of the President of United States of America, Hillary Clinton can create a history if she wins by becoming the first ever Woman President of the United States. Will she create that history? Only time will tell.....

Disclaimer: The information mentioned above were sourced from various websites through google search which were being reproduced in my own words and is just my personal opinion and does not reflect the opinion of any one else.