Who is a friend? Is there a specific definition for this so called "Friendship"?

If someone throws these questions to you, what will be your answer?

According to me, a Friend is a person who is beside you thick and thin and gives you the helping hand at the time you needed them the most. It may not be of financial help all the time. As a kid, I have seen lot of movies that has glorified the friendship in various languages and have also read books and magazines which has talked about reel and real life friendships. I have also had few friends during my schooling, college and work life. But if you ask me the name of that one friend, the name that reflects on my mind immediately is Senthil Raj Babu.

Senthil came from another school during the higher secondary session and when I saw him for the first time. I had an opinion that he must be a "show-off guy". Many of us tend to form an opinion about a person even before we get to know about them in full, isn't it? I was no exception.

What made him become my close friend?

It was an event which is still evergreen in my memory that made me realize the value of a true friendship. It may sound silly now but when that took place almost 20 years ago, it was a huge one for me. I was the Class Leader by then and during one of the breaks, I came running inside the class as there was so much of chaos. My shoe laces got tangled and it made me fall on the ground with a thud. While everyone laughed at me instantly, it was Senthil who immediately rushed up to me and gave me his hand to support me in getting up. We became close friends from then on.

There are lots I can say about this guy.

He is the one who has inspired me to dress well. He made me embrace some of the popular brands across various sectors including clothing. Prior to his interference, I was pretty much unorganised and I always believed outer look isn't important but he made me realize that it is not the case.

We use to have a healthy fight when it comes to studies but the irony is he has never beaten me in securing that so called "First Rank".

He has seen my ups and lows and has always been the same person irrespective of the situation. What makes him more special is another event which happened much later. After finishing our college in 2001, we went to seek our careers in different companies and in different places. Using an e-mail was an expensive affair and mobile phones were just getting introduced. Needless to say, all we had was a landline and a dial-up internet connection. The pic shown below is  group pic as we never heard about selfies those days. 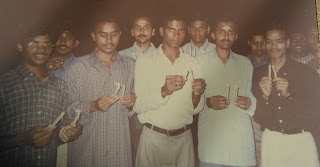 We got separated and when Facebook was introduced, I tried searching for his profile with no luck. Since I could not find him for almost a decade, I gave up.

On the other hand, he did the same and he was successful in finding me. When I saw his friendship request one fine day, my joy knew no bounds. I started jumping with joy. I immediately accepted the request and sent my contact no as a private message. The very night, he called me all the way from US and spoke to me for more than an hour. He spoke to me often after that. He encouraged me a lot when he heard about my profession. When he said he is coming down permanently to India, I was the most happiest person in the World. He is here now and do I need to say that these were the happiest days in my life??

Check this out to find out more about friendships and the impact it has in our day to day life. I am sure this show is going to be a super-hit show for sure because it seems that it would cover the lives of celebrities too and it would be a great chance for us to get to now about that in close detail. Here is the link for you -> http://www.ozee.com/shows/yaaron-ki-baraat.