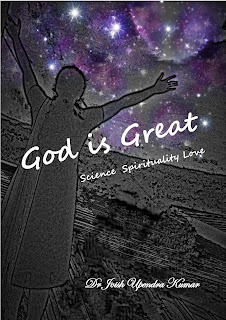 Title - God Is Great
Author - Dr Joish Upendra Kumar
Genre - Indian Writing / Non-Fiction
Publisher - White Falcon Publishing
ISBN - 978-1636400075
A short but a powerful read. The book takes us on the journey of the author who initially was reluctant to believe in the rituals associated with God worship(Point to be noted here is that he is not an atheist) but how his perceptions gets changed to/for good.
The novel is a thought provoking one which has been narrated beautifully by the author. He always opined that GOD is a super natural being who handled the creation with precision. Hailing from the pious family, he never supported his parents when they wanted his help badly, in making arrangements during the festivals/puja.
Things takes a u-turn when he meets Dr.Pence who is considered as the living legend in the field of science. When Dr.Madhav, the protagonist meets him, the perception towards religion and spirituality changes for good.
What did Dr.Pence, an authority in Science say?
His meeting with Sangeetha, who was her college mate in Tapovana change him completely.
What did Sangeetha do?
Why do we worship God in various forms? Did you ever thought about it?
The explanation of Gravity and it's influence on human beings was explained so beautifully that you wouldn't stop wondering. The subsequent explanation of how is Universe interacting was mind blowing. This is where you might realize that the author has delved deep into the subject which is a combination of Science and Spirituality.
Do you know how much time does the rays from the Sun takes to reach us?
How far is the nearest galaxy located?
Is Time Travel Possible?
This is where Dr.Pence takes a reference of a Indian legend which would leave you dumbstruck. Though we may not believe completely about the happening of Ramayana and Mahabharatha, the presence of cities like Ayodhya, Mathura,Dwaraka and the seabed link between Dhanushkodi and Lanka are the testimonial to the happening of those historical events in the past.
Did GOD possessed Super Powers?
There is a perfect explanation to this as well. There were many pressing subjects which found a mention in tis book which makes it really special.
Though the subject is intense, the way it was explained and handled makes it a light and a pleasant read. The infusion of love angle in this is really amazing. This book would appeal to people of all age, religion, culture and customs for the fact that the content that found a mention in this awesome book is Universal where author has tried to share his wisdom which he has acquired through his observation, interaction with the others.
"One day, Science will lead us to The Almighty as it is the Bridge to God". Can you give a perfect explanation than this?
This book is available on Amazon India website in both eBook and Paperback formats.