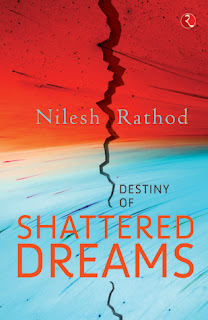 An excellent emotional fiction by the author is what I would say and this would be a perfect storyline for an Indian Film be it in Bollywood, Tollywood or Kollywood.

It talks about the rise and fall of Atul Malhotra who had a humble beginning. He along with his friends Prem, Anil and Rakesh sets up TTL - a Telecom Company. He was ably assisted by Qazi who served as his Legal Counsel as well.

Though Atul had high ambitions, he was against ill-doing but not until he met with Shalikram who was introduced to him by Mir who was Atul's good friend. Mir stayed in Delhi and used his position to lobby powerful politicos to invest in other's business.

On the other hand, Atul's personal life was also at stake. His better half Roshni who he married after being in love, 11 years back was not happy with the fact that they never had a child and adding to that when she got pregnant later, Doctor Awasthi said the child may be born with autism.  Atul insisted in aborting the kid but Roshni did not allow him to do it. n the meanwhile Atul gets attracted to his employee Aarti and when news gets leaked to Roshni, she walks out of the house and send divorce notice to Atul.

Now Atul badly wanted to take out Shalikram from his business and he seeks the help of Mir who sets up a meeting with the Finance Minister Shravan Kumar Poojari who Offered to invest Rs.2,500 Crores in TTL. He also ask Atul to meet Elisabeth in Switzerland to take it further.

Shalikram loses his ministership in the meanwhile but prior to that he lobbied for Atul's office to be raided by ED. He also tries to eliminate Atul. Atul brings this to the notice of Elisabeth and within few weeks, Shalikram gets killed.

What happens to Atul, Roshni, Aarti is what the story is all about in the end. It was a perfect ending which I had not expected. Do buy the book and I am sure you will be glad that you read it.