Book Launch - The Ocean of Churn,Odyssey 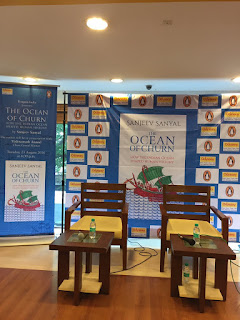 When I got the e-invite for the book launch of The Ocean of Churn, my joy knew no bounds as it was all about meeting 2 great personalities. One is the author himself Mr Sanjeev Sanyal who has got many feathers to his hat and the other one is Chess Grandmaster Mr Vishwanathan Anand.

As usual I had reached the store an hour before and I was pleasantly surprised to see the arrangements that had been done to welcome all the guests. I was also lucky to meet Mr Sanjeev as he was already there. Since he has flown all the way from Singapore(where he resides), I did not want to disturb him asking for a video interview(Though I shot series of videos later during he interactive session and book reading which you will see it later).

Vishwanathan Anand came and for a brief time, he sat on the seat next to me and my heart skipped beat. He is one of my idol/inspiration since my childhood. He then went to the stage and took the dias. The session started. Take a look at the videos below.

Once Vishy's speech was done, it was the Author's turn.


As you could see, I have given the videos in small snippets so that it would be easy for you to view it especially when you are in low bandwidth plan.

The session was really awesome as we got to know the different prospective of Indian History which were not told or taught to us while we were in the school. The book is available in all Odyssey Stores and is priced at Rs.599

It is surely worth the money, in fact I would say more than this because of the tremendous hard work being put in by the author in researching hundreds and thousands of books and journals both online and offline. He has also made sure to visit some of the places personally to get to know the better understanding as to why a particular occasion is being celebrated.

Finally I got to click selfies with these two amazing people. 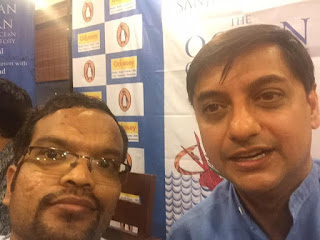 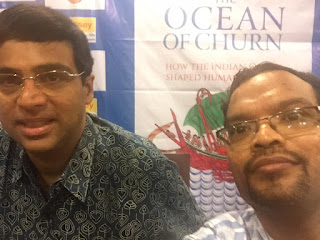 It was an evening well spent.