1
Uncategories Kabira-Not Until I Die by Arvind Parashar

Kabira-Not Until I Die by Arvind Parashar 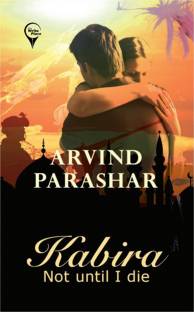 A beautiful story that brings out the devastating effects of the war. Author has penned it so well that I was lost reading this and only after I finished reading it, I came back to my senses.

The story is about how a couple who fell in love during their education in another country comes together in the end.

Kabir was born in India but had been to Russia for his higher studies where he meets his Professor on who he placed much of his trust. He meets his girl Noor over there and starts liking her. As the fate decides the destiny, they had to be separated when Noor had to return to Afghanistan. Sensing Kabir's love for Noor, Professor spins a web and in the context of helping the country in its development, sends Kabir to join a American Press but to work indirectly for Russians.

Kabir did not sense anything wrong in the beginning but when things starts going wrong, he starts suspecting his Professor and at one time, he comes to know about the fact that his Professor was the master in disguise and has doned different roles under different names and unfortunately one of the top officials in US Embassy also whom he trusted the most had been working on hands with the Professor.

Kabir and Noosh gets married and Noosh becomes pregnant when Soviet Army starts attacking Afghanistan. Noosh had to go alone to Mumbai where Kabir's parents were residing. I guess I have revealed almost half of the plot here. For the remaining plot which is much more interesting than this can be read by buying the book online. This excellent book is available on Flipkart and also on Amazon

Buy the book now and show some love to the Author. By the way, my rating for this book is a perfect 5/5