The Photo that captured me

There have been many pics that has captured our attention from time to time. They have been from across the globe symbolising on various aspects including famine, drought, war, refugee and so on. We get moved by the devastating effect these pictures carried through the lens and reached us on the other part of the World.

The pic that had captured not only my attention but also the attention of millions worldwide in the recent past is undoubtedly this: 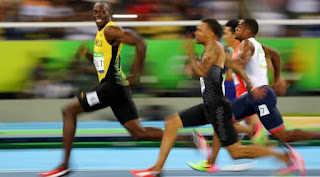 How will one forget this iconic capture?

This pic has so many memories attached to it. It first showed the supremacy of the Runner Usain Bolt who has established his dominance over the other runners for the third time in Olympics in succession. His stint began in 2008 and continued in 2012 and now in 2016 as well where he has won the 100 and 200 metres with ease.

Though many had challenged his fitness including the great spriters like Powell, Gatlin no one could come anywhere closer to him. Usain Bolt had always been confident of his form before the start of the Olympics and has proved himself time and over again silencing all his critics.

He knew what he was doing and who will forget his trademark Lightning Pose?

This Pic had become viral on Social Media where he was praised not only for his talents but also for his cheeky side. This pic seems to be mocking the other runners that he could beat them with ease. This also showed how he has gained his momentum beginning a bit late when compared to other runners and trailing behind even until 40 metres of the designated 100 metres and slowly gained momentum and took the lead and when it was 80 metres, he was already leading and others struggled to catch up with his speed.

When you know how to take the lead by saving your energy in the start and executing it at the right point of time which is also a management skill, no one can beat you. Usain Bolt has proved it time and again. I bow to you, Champ!!

You are certainly an inspiration for many for having put your country Jamaica in the map through your dedication, achievement by delighting us.....


This post is a part of Write Over the Weekend, an initiative for Indian Bloggers by BlogAdda