"Cleanliness is next to Godliness"


We would have read that phrase during our schooling days. How many of us are following it diligently?

We buy some candy from a local kirana store or a chewing gum and what do we do once we consume it?

We either throw away the paper or spit the chewing gum on the road despite the caution/warning that the chewing gum needs to be spit on the silver wrapper that comes along with it and to be disposed off on the dustbin.

I am NOT blaming everyone here but the ones who are still ignorant and has that "carefree" attitude. What makes our country most respectable in the eyes of other nation is how we keep our place clean.

I believe in this "Cleanliness should start from home". You need not have to go on the roads to start cleaning it. Government has appointed cleaning workers to take care of this. All we need to do is to assist them by disposing off the waste in the right place and at the right time.

Chennai Corporation is one of the biggest and oldest Corporation in India. It is spread across mind boggling 426 kilometres with more than 5 million population dwelling in this city making it one of the crowded cities in India and in the World. Hence it becomes a Himalayan task for the Corporation to clear all the dumplings as they need to clear hundreds and thousands of tonnes on a day to day basis. What adds more to their woes is the segregation.

You read it right. Segregation.

We mix all the garbage into one and throw it away. This is indirectly a threat to the nature because these may consist of a mixture of both - degradable and non-degradable materials. The non-degradable ones include metals, lead and most predominantly plastic. These components would never decay for hundreds of years together and thing like lead would poison the soil which would become a severe threat to the existence of plants and other micro-organisms.

Considering this in mind, the present Government had introduced two kinds of bins and were distributed free of cost to all the households couple of years back. These were RED and GREEN bins with pics pasted on it for anyone to know how to segregate the materials where RED stood for non-decayable ones and GREEN stood for decayable waste which included food waste, vegetable waste etc.,

My question is this... How many are even using them? I had seen in my personal experience that they were used for other purposes and some had even gone to the extent of selling it of. When this is the case, how can we ensure that the waste particles are segregated at the basic level? If each and every one of us do this diligently, it is much easier rather than one Government is entrusted with the duty of segregating thousands of tonnes of waste which is not only time consuming but also is a drain in the coffer as they need to pay the workers which again will be obtained from us by way of taxes.

Central Government has been visionary in this. In the august presence of our PM, Govt had announced "Swachch Bharat" Initiative and it has been implemented across the nation. If you might have noticed, Govt has also started imposing Swachch Cess on goods and services.

Tamil Nadu Government also conducts lot of clean initiative drives across various zone We must have also seen lot of private companies and NGO's actively involving in cleaning up public places like parks and most predominantly our own Marina Beach since this is the place which gets inundated with waste materials on a daily basis. Not less than few tonnes of waste gets retrieved whenever "Clean-Up Drive" happens.

Having said all the above, I came across this amazing website CleanChennai which talks in great detail about the initiative taken by the Corporation of Chennai. They have partnered with some of the well known brands from across industry which includes TATA Consultancy Services, Hyatt, Virtusa, Social Beat, Samriddhi Foundation to name a few. As mentioned earlier, this cannot be done by a single person's effort. It has to be done on a collective basis.

The website also goes about giving more info like Events Near You. This can be an initiative planned by someone else already or you can volunteer yourself of taking up the initiative in your locality. This can be cleaning the park in your place, educating neighbors about segregating the waste and the importance of it.Once this is done, it will be relayed on their web and when someone from your locality browses it, he/she will come to know about it and can volunteer for the cause by joining you.

What attracted me the most is the Resources Section. It is pretty much self-explanatory. 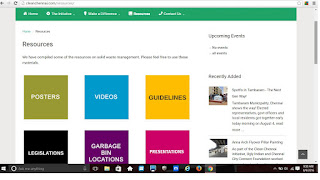 You can also post about the photos if you have recently been a part of any clean up initiative in Chennai by following the instructions on the slide given below. Get Set Go... 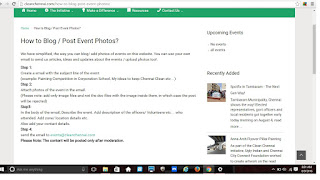