It was a dream come true moment for me when I heard from my sister saying that she had won the contest and the management of Kalyan Jewellers has agreed to admit 2 people to witness the glitzy opening of Kalyan Jewellers showroom in Velachery on 25th September 2016.

We were asked to be there by 9:15AM since the event was scheduled to begin at 10AM. As we were in the other part of the city, sister and I had left our premises by 7:45AM and reached the venue well before time which was 8:20AM.

It was such a grand preparation which showed how much importance Kalyan Jewellers gives to their showroom opening ceremony. While there was a tight security with bouncers, cops and barricades, we entered the venue since we carried the letter with us. 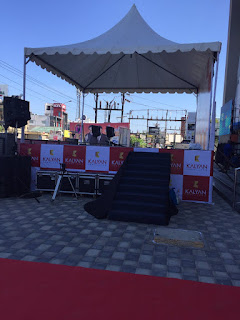 After an hour, we were allowed to enter the showroom and we were asked to be seated near to the kids play area. You read it right. Kalyan Jewellers has a kids play area which means if you are going with your kids, you need not have to worry about their troubles. Just leave them there and you can carry on with your shopping. 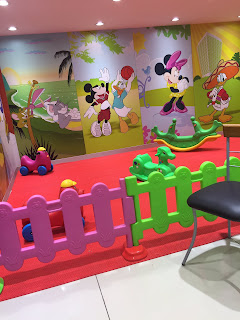 We were kept informed about the happenings. As soon as the chief guests arrived, we were informed and were put on alert. After few minutes, the Kalyan Jewellers Management team headed my the Founder Mr Kalyanaraman along with his Sons and Actors Prabhu and Sonam Kapoor came to the place where we were waiting. On sensing the seriousness prevailed, Mr Prabhu took the initiative of breaking the ice by cracking the joke "I know you guys were all waiting to see Sonam Kapoor" and everyone laughed. I must really appreciate Mr. Prabhu for making the situation light and jovial and though he was asked to sit to start clicking the pictures, he has kindly asked Sonam to take the seat and start clicking pics. 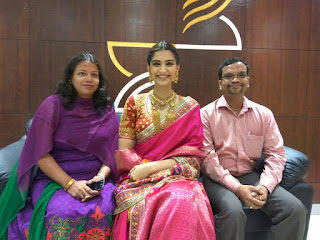 That was a nice click isn't it? After we got our pics clicked with Sonam Kapoor, we immediately approached Mr.Prabhu. What was even more surprising was it was Mr.Prabhu who himself clicked the selfies. I did mention to him that I was lucky to get his father legendary actor Shri Chevalier Shivaji Ganesan ir's blessings in the Mahalingapuram Ayyappan temple almost 20 years back and seeked Mr.Prabhu's blessings too and was luck enough to get his blessings. 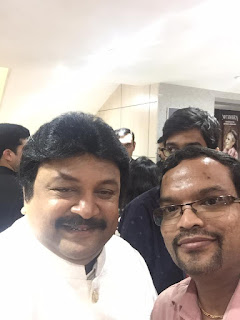 What was an icing to the cake was when I came to know later in the evening that Sonam Kapoor has uploaded our pics on her official Snapchat id. What more can I ask for? 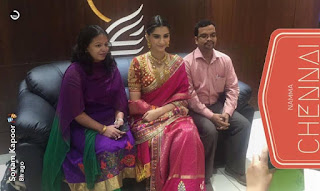 It was an experience of a lifetime and I thank Kalyan Jewellers and its management from the bottom of my heart for making it happen :-)

Looking for "kalyan jewellers"? Then we are the best for you, who suit your expectations and budget. We have huge collection for jewellery item.
If you want to know more, Please check out here: kalyan jewellers