1
Welcome to Sarath Babu's Lifestyle Blog Others Is R Ashwin the greatest spinner of all time?

Is R Ashwin the greatest spinner of all time?

We have seen some amazing cricket in the recent times. The emergence of Virat Kohli as the Test Captain and surpassing all the others when it comes to Success Rate as he has claimed 10 out of the 17 tests shows his supremacy in the field of cricket.

Having said that, it is not a one man show which we all must agree. When it comes to Cricket, it is a group effort and only when that clicks, the records are shattered and the history is made/created.

While most of us were awestruck with the only Double Century in the India-NZ 3 Test Series,2016 by Virat Kohli, when we look at the score cards, he was only placed at 3rd Position after Cheteshwar Pujara and Ajinkya Rahane.

When it comes to bowling, the unanimous name that would be said by everyone without giving a second thought is Ravichandran Ashwin. His total tally of 27 wickets is impeccable considering the fact, the next one was placed at almost half his tally at 14 wickets by Ravindra Jadeja. Ashwin has been in great form ever since his debut and his 7 Man of the Series Awards in 14 test series he has played so far itself is a World Record. He has also emulated the Indian Record for the most number of Man of the Series Awards without much sweat. 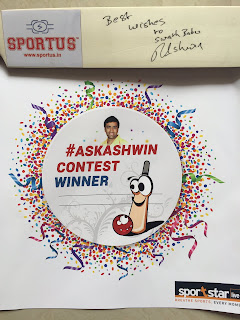 In this India-NZ 2016 test series, Ashwin has also surpassed another record - most no of wickets against NZ in a test series which was held earlier by BS Bedi with 22 wickets.

Ashwin is just in his 6th Year. While the all time record holder of most number of wickets ever is being held by Muthiah Muralitharan with 800 Wickets, one should not forget the fact that it was made possible since he has played test cricket for more than a decade. One should not also forget the fact that those days, test cricket were played in plenty. Shane Warne comes next with 708 wickets.

Though Ashwin is just 1/3rd of Shane Warne and little over 1/4th of Muthiah Mualitharan, the consistency he shows in the game with both bat and the ball has also got him to be placed as no.1 Test All Rounder which even his counterparts has not achieved. Ashwin's support to Team has been amazing. The whitewash of the test series against Newzealand has made to claim No.1 in Test Rankings again displacing from the top.

Ashwin is the fastest Indian to get 50 and 150 wickets and also the record holder in the World in securing 100 wickets in just 18 matches.

Though we cannot say at this stage whether Ashwin will become the all time highest wicket taker in Test Cricket, all we can say is "He is already in the race".