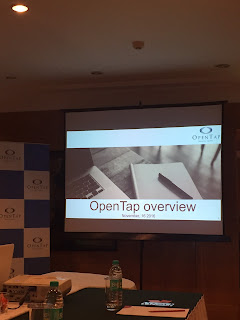 OpenTap, a Chennai-based Alternate Finance startup, today announced its official launch of operations with an INR 17 Crore loan book. While 15 Crores has been given by Trichy Rockcity Finlease Limited as Debt Financing, Rs.2 Crore has been pumped into the company by the founders as Equity.

The company provides convenient credit to low and middle income groups in the country, predominantly focusing on the industrial belts. The company has also announced a strategic partnership with Trichy Rockcity Finlease Limited to further strengthen their operations.
In line with the Government’s Digital India directive, customers are encouraged to register themselves online with necessary identity and address proof documents. Providing the advantage of bringing loans to their doorstep through efficient partnerships with employers, OpenTap gives low income customers the opportunity to overcome the hurdles of complicated loan application procedures. The turnaround time from loan application to loan approval is 72 hours as opposed to longer durations often seen at traditional banks.
Peer-to-peer lending platforms in India are helping a huge section of customers who were previously rejected or unqualified for loans from banks. With Trichy Rockcity Finlease Limited on board, OpenTap will now be able to address a wider section of the population, expand its horizons and empower the employed yet underbanked population in India. OpenTap, currently present in Chennai, Bangalore and Nashik, has plans to expand into Trichy, Coimbatore, Pune, Ahmedabad, Vishakapatinam and Vijayawada.
Speaking at the launch, Mr. Senthil Natarajan, Co-Founder & CEO, OpenTap said, “We see that millions of salaried Indians with repayment potential are needlessly denied credit. A major segment of this population is neglected by traditional banks leaving them at the mercy of money lenders, who charge exorbitant interest rates.Addressing this gap and enhancing inclusivity has been the primary driver for the inception of OpenTap.
“We are already seeing a huge surge in demand from employers who want us to help out their employees with credit. With an INR 17 Crore loan book, we know that the demand will just get bigger. With our aggressive growth plans, we expect to increase our loan book to an ambitious INR 5000 Crores by 2021", he added
Mr. M. Balasubramanian, CEO Trichy Rockcity Finlease Limited said, “We are pleased to partner with OpenTap, a motivated P2P lending startup. Our companies will join hands and work together to protect the interests of numerous Indians who are burdened by lack of credit. Together, we are confident that we will be able to curb customers from falling prey to money lenders who charge high rates of interest and create a disruption in this market.”
With financial empowerment at the core of their business, OpenTap, is led by Mr. Senthil Natarajan. The core team supporting him, has extensive experience in Investment Banking, Retail Finance & Marketing.

The company has majority of its customers in Bangalore. The company does not come under any regulator as of now and there are no collaterals asked for the loan. The average ticket size of loans by the company at the moment is pegged at Rs.25,000 and they are looking to raise it by manifold.

One can foreclose the loan as well and there are no foreclosure charges or penalty. This is something which would help the borrowers in a big way as the liquidity crunch at any given point in time can effectively be addressed by the availability of loan in 72 hours. The company is planning to reduce this turn around time even further.

The company at the present moment has kept the maximum loan amount at Rs.50,000 and the maximum period is for 12 months. When it comes to Bad Debts, the company is doing exceptionally good with just 0.6% which is way more than normal. The company is also looking forward to institutional investors to help them in expanding on their business.

As per a recent market survey, it says a staggering 200 million adults are financially excluded which shows the potential which is what the copmany is looking to tap.
About OpenTap:

OpenTap is an early stage alternate finance company aiming to bring financial inclusion to over 70 million aspirational Indians into mainstream and giving impetus to inclusivity in education, access to technology, medical help and tackling everyday scenario of their personal lives. OpenTap works relentlessly to bridge the gaps in the current banking system with alternate sources of finance and at fairly competitive interest rates.

Trichy Rockcity Finlease Limited (TRFL) is an NBFC registered in 1997, headquartered in Trichy. TRFL is part of a larger group of financial institutions whose key objective is to save people from the clutches of money lenders who charge high rates of interest. TRFL is predominantly present in the Delta district of Tamil Nadu and has aggressive expansion plans.