Aircel Blogger Meet took place yesterday(17/11/16) in their Chennai Head Office at Prestige Polygon Towers and we knew there will be lot of things that would be discussed by Mr Sunil Kuttam, National Head - Data & Devices,Aircel. 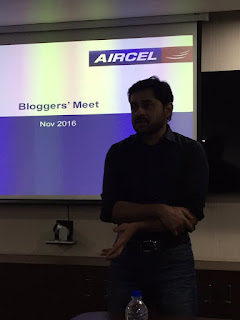 As soon as I posted the message on my social media channels about this, I could see a flurry of messages asking about new plans that the company would be unleashing. I knew why it was the case - Aircel merger with RCOM is what that has triggered this. As this has been circulated in the news for a while now, it is official and would come into existence from 2017 and this would make the combined entity, the fourth largest player in the Telecom Industry.

What is Aircel doing in the Data sector?

Be Online with Aircel is another initiative which has encouraged its consumers to stay online with host of industry-first data products that made mobile internet to all. The success of these products helped Aircel register a 74% in 3G data revenue and 76% 3G data consumption growth in little less than a year.

3G for Rs.9  has brought down the digital divide between the urban and the rural area.

1GB 3G @ Rs.47 with validity for one night comes handy for those who use the internet aggressively. whereas  a medium data user gets 1GB 3G dATA @99  & low users gets it for Rs.147

1GB 3G @Rs.24 is a unique plan where all the existing and new consumer first need to recharge with Rs.329 which would give them 2GB of 3G Data with a validity of 28 days and subsequent recharges can be done for Rs.24 as against the rate of Rs.41 per GB . The main recharge is available in he range of Rs.291 to Rs.329

LIMIT SE ZYADA(LSZ)  offers the consumers with a heavily loaded COMBO plans with unmatched value proposition. This takes care of those who waned both - Voice and Data as this plan offers Talk Time of Rs.700 & 7GB of 3G Data which works out at Rs.11 per GB of 3G Data.

Mr Sunil Kuttam also compared the scenario between India and China where he discussed on how China is far ahead with regards to infrastructure where one particular service provider in China alone has more towers than all the Indian operators put together but having said that, he is sill glad that we are progressing in much faster pace when compared to other countries and client's inclination towards 4G and shifting from 3G from 2G would ease the congestion on the 2G networks making it more pleasant for new users of internet who would mostly end up subscribing to relatively inexpensive 2G Plans.

The speeds of 3G and 4G were also discussed. Where the average 4G speed in China starts from 25Mbps and upwards, we are still reeling less than 15Mbps and he is hopeful of the speeds to be improved sooner or later.

Aircel is one of India's leading innovative mobile service providers. The company s a pan India 2G operator with 3G spectrum in 13 circles and is credited with the fastest 3G roll out in the Indian telecom space. As a young data led telecom player, Aircel has constantly been at the helm of introducing innovative and value for money products and services for its customers, be it the Aircel Pocket Internet, taking the first step in making 3G affordable for the masses or launching revolutionary industry first data products aimed at fuelling internet adoption. The company has been the proud recipient of coveted awards such as Voice&Data Special Leadership Recognition in "Customer Service" category, ET Telecom Award 2014 for its innovative customer care research model, Aegis Graham Bell Award 2015, in innovation for its "Zero Premium Assurance" solution for high service availability, Data Quest Award 2015 for "Excellence in implementation and Use of Technology for Business Benefits".

Yes. You can expect them to be unveiled post December 31st :-)