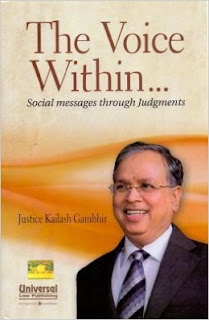 For the first time ever, I am NOT reviewing a book but would be writing as to how I felt reading this book. Having read various laws - Companies Act, Personnel Management and Industrial Laws, Civil Procedure Code(CPC), Criminal Procedure Code(Cr.PC) in B.A(CS), MBA and ACS Intermediate, I could very well connect with most sections mentioned on this book.

The reason for me not to Rate or Review this treasure trove is because I firmly believe that no one has the authority to comment on a Judgement given by a Justice unless it is really impeding the real nature of the justice where the intervention is done by the higher authority or commanding eminent like the CJI or The President.

For the first time, rather than reading about the outcome of a case as a part of a subject, this book gives the reader a golden opportunity to go through the actual judgement as exactly been given in many of the cases which has attracted national and international interest.

If you are an advocate, Justice Kailash Gambhir needs no introduction. In fact the foreword of this book was written by none other than the Chief Justice of Supreme Court - Justice T S Thakur.Special Message were given by Judges of the Supreme Court of India - Justice Madan B.Lokur, Justice A.K Sikri and Justice Vijender Jain who was the former Chief Justice of Punjab and Haryana High Court.  Last but not the least, Nobel Laureate Kailash Satyarthi has also given a message.

The book talks in great detail on various subjects like Crime Against Women where there is an interesting mention on "Himmat" App. Some of the other subjects were Child Witnessing awesome murder of her mother for want of male child, dowry death and bride burning, Fair Trial, Judicial Temperament, Duty or Bar Council against erring members to name a few. The book will make even a person who is ignorant of law (Judicius Non Excusat) to get to know about legality of various cases in great detail.

There are 10 chapters in total and it also covers topics like Cases of Original Jurisdiction, Education, Service and Labour Matters,Cases of Writ Jurisdiction making this an interesting read.

I could not agree more when Justice Gambhir has called a Drunkard Driver - a Live Human Bomb. Similarly I would like to highlight his famous remark "The Life of a Human is no cheaper than a Nano Car". In one of the cases, Justice Gambhir has criticized the insurance company which is real fast in settling the accident claim by paying up for the damage caused to a vehicle but delaying the same when it comes to paying the compensation for the claim of loss of live.

Foot Paths were also covered by him where he asked whether it is for Walking or Hawking?

Another interesting fact mentioned in this book is about the Chinese way of taking oath by breaking the saucer in the court (ours is taking oath on Bhagavad Gita or Bible or Quran) where in, if they ever uttered a lie, their soul will break like a saucer.

Having authored 1345 judgements, Justice Gambhir is certainly an illuminary for Law which still holds its Trust and Value because of Judges like him. My heartfelt thanks to the Lw Researchers Anchal Chaudhary, Urvashi Uppal and Vimija V Nair in persuading Justice Gambhir to recor his judgements and bring it in the form of the book which can not only help other researchers as a quick reference but even for common public to understand the nuances of Law. Jai Hind!!