Shadows of the Northlands 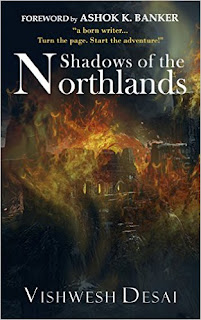 Firstly, hats off to the author Vishwesh Desai for penning such a marvellous fantasy fiction which I would compare it with Chronicles of Narnia, Lord of the Rings and the likes of other titles which were penned in the west. The wordings that were used in the novel is simply stunning considering the fact that the author is just 14 years old.

What was even more overwhelming is the volume of the story. It isn't ending in 200 pages but is an elaborate one that runs close to 500 pages. Lot of thought process must have gone into this for sure. What I have also liked is the usage of maps in the novel.

As you see in the below pic, The Empire is surrounded by Ehor, Tessamese Kingdom and Northlands. The Empire always had trouble with Tessamese Kingdom and their boundary was protected by military outposts. When these outposts were attacked by some dark forces which could not be identified, people were horrified by the sheer strength of their enemy.

The news reaches the Crown Prince and he summons his nobles Lord Rikkard Aybanar and Lord Merin Doilin who sets out on an expedition to find out the truth about the dark forces. They were joined by Corlan and Matt, Jaan,Sorin and Mellar, Teren. 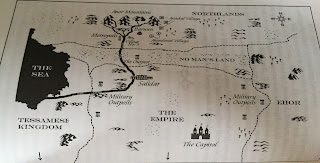 They set out on an expedition and in one of the places, when they were attacked, Shaman comes to their rescue. Essen, a Northlander joins Merin after convincing him to hire him. Northlanders were usually offended when they were called as Northerners or one from lesser lands. Essen stumbles upon a carcass that was neither a human or an animal. 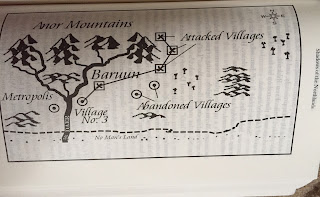 Shaman knew the magic of "rak maya" which is also called as "blood magic". Even though the group is powerful, they were unaware of the power of the so called bandit monster. Lord Rikkard nd Lord Merin who were believed to be possessing unlimited strengths did not get an opportunity sooner to reveal their real powers.

Who was this dark force and what did it actually want? This gets unfolded beautifully in the sequence of events which makes this novel, a compelling read. The book is available in Amazon. Do buy it and give a read. I am sure this would surely not disappoint you. It would serve as an excellent gift for the kids.