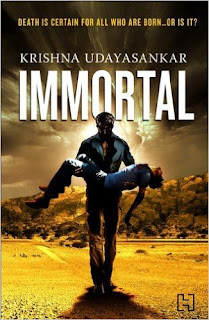 A novel which revolves around a character who is known to be Immortal but has been forgotten over the period of time. The character is none other than Asvattama, son of Guru Dronacharya who takes various births in various names searching for Vajra.

What is Vajra?
Why is he searching for it?

Having said that, Asvattama takes the birth in the name of Professor Bharadvaj. He is by now 4,000 years old. In this avatar, he has a nemesis called Hari and also a pal called Manohar who assists him in various expeditions.

Professor and Manohar meets Maya Jervois who confirms Vajra existed even though they both were reluctant to believe it initially. They travel to various places like Srisailam, Somnath and finally to a place in Pakistan.

The group also gets help from another faction called Moorthy who were known as "Custodians" of the Vajra. What happens next is all about this fast paced thriller.

I would say that the author has taken great precautions in spinning the story coupled with historic events that makes it sound real. If you have started to believe that this would be real in some way or the other, that has defined the success of the author.

Buy the book from Amazon and refer it to your family and friends too.