Khan Vs Kahn Vs Kanh 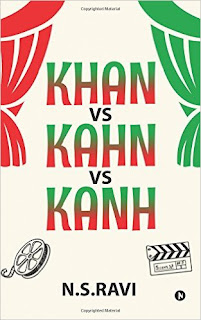 To begin with, I must give the disclaimer which is already been given by the author - The story does not resemble any of the Khans of the bollywood and none of the other characters resembles any of the living person though you may get some connect.

I must say honestly that I was stunned by the story line especially when the author claims that he has not visited any studio or sets to see film shooting but has given an extensive story line which is simply amazing. Though I felt that the length of the story may have been reduced to a little extent, I also understand that the story what I read is already a shortened one and hence I would not be judging the story on its length which may make it little boring.

What I liked the most is the uniqueness of the story. Having read not less than 1,000+ stories, I can certainly vouch that his story is really unique and I was taken by sheer surprise with the way the story was scripted with equal importance given to almost all the characters making it real difficult for any reader to find out who the real hero was :-)

You might also get little confused in the beginning as to who is who and to clear the doubt, I am giving few info here.

Now coming to the names to make you understand who is who.

As you could see, there is a combination of religion among the names and characters which the author has handled it so beautifully without any mix up or confusion.

The story begins when these three Khans creates a ruckus at the Iftar Party hosted by Baba Ram Karim and he wanted to avenge his redemption for their unruly act. He masterminds a brilliant plan.

Did he manage to succeed in it?

Read this fiction and if you love movies, you would love this book for sure.