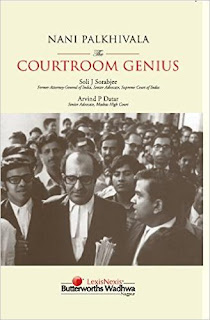 The book is a treasure which would not only appeal to the Law Students/Graduates but also to the general public beyond any doubt. The book was written by two eminent personalities namely Soli J Sorabjee who was the former Attorney-General for India and Senior Advocate - Supreme Court of India & Arvind P Datar who is the Senior Advocate, Madras High Court

The idea to bring out this book was conceived in 2004 and was first published in 2012 which shows how much of hard work has gone into bringing out this legal treasure trove. The book talks about one of the greatest advocate India has ever seen - Nani Palkhivala

It talks about how he gave importance to time management and becomes visibly annoyed when the time punctuality was not adhered. I was surprised by his sheer dedication where he gave appointments even during the odd hours as he practised his profession 24/7. He stood first in L.LB and OA and was a voracious reader and read Peter F Drucker.

As a child, Palkhivala had a stammering problem but later he enthralled hundreds of thousands through his voice and argument.

He joined chambers of Sir Jamshedji Kanga in 1944. He did more cases before the ITAT(Income Ta Appellate Tribunal) than in High Court and Supreme Court, combined. I was glad to come across the legal terms like Mandamus, Certiorari which I have read while preparing for my Company Secretaryship(CS) Intermediate exams.

Being the leading advocate, he has appeared in famous cases which has been cited in various many cases/events till date which included:

Bank Nationalisation Case - mentioned by M.R.Pai in his book "Legend of Palkhivala" where he said no bank had even written a Thank You letter for all the efforts put in by him which got them an additional sum of Rs.58 Crores during the nationalisation.

Privy Purse Case - where Presidential Order abolishing it was dismissed in the Supreme Court citing this can be done only through a Constitutional Amendment.

Kesavananda Bharti Case - where the Fundamental Rights were discussed in detail. This case was tried by 13 Judges and was the largest Bench which saw lengthy arguments and widest area of case law in Supreme Court.

to name the few important/monumental cases ever been tried in the Indian Courts.

A special mention to the 6 appendices in the end where it has reproduced in great detail about few things but not limited to Letters, Landmark Cases, Verdicts, Affidavits, Selected Opinions and Propositions among all.

The book is available in Amazon and all leading book stores.