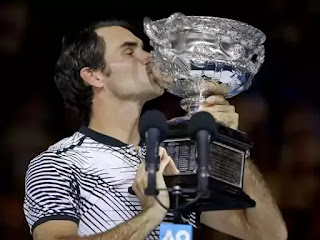 Roger Federer, the Swiss National created the history yesterday by winning his 18th SLAM when he defeated Rafael Nadal in the Australian Open Finals,2017.

Why is it so important and what makes it special?

Here are some of the anecdotes.

2) Federer became the first man in tennis to win 5 titles at 3 different slams. The other two being US Open and Wimbledon.

3) Federer became the first man in tennis to cross USD100 Mn in prize money earnings. He has amassed USD 102,530,825 as on date (30/1/17). This is exclusive of his brand endorsements and deals which is worth few hundred million dollars.

4) This is the 100th match which Roger Federer has played in Australian Open.

6) His close friend and another tennis legend from his country - Stan Wawrinka who is also his Davis Cup Partner is currently placed at World No.4

7) Federer did win French Open only once in the year 2009 which had eluded him ever since his debut and has eluded him after 2009 till date.

8) This is the first time that Roger Federer has played 5 set matches thrice in a Grand Slam.

9) Federer equalled another feat which was achieved by another tennis legend Pete Sampras as he too did win a major when he was placed at World No.17 by winning the 2002 US Open. He is also the lowest ranked to win a major since it was won by Gaston Gaudio in 2004 when he claimed the French Open being placed at World No.44

10) Federer trails 3-6 on one to one with Nadal with Nadal claiming the victory when they met prior to this in the 2007 Wimbledon Finals.

11) Federer has another distinction too. He is a father of couple of twins. He has a twin daughters and twin sons.

12) He is the only professional player in tennis who has won US Open for five successive times.

14) He was named Laureus World Sportsman of the year for four successive years from the years 2005 to 2008.

16) Federer is a UNICEF Goodwill Ambassador.

17) Boris Becker and Stefan Edberg are his tennis role models.

18) In 2007, he became the first living Swiss personality to be featured on a stamp, holding the Wimbledon Trophy.

19) There is a street in Halle which is named after Federer. It is Roger Federer Alley.

20) Roger Federer has never retired from a match.

Hail the Legend. Let us wish him all the goodness and I personally wish to see him win few more slams prior to his retirement :-)