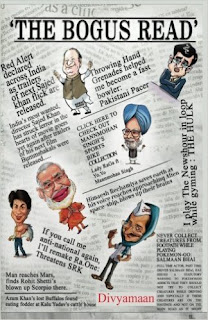 This is the first time ever I laughed right from the beginning of the book till the end. The book is an excellent attempt by Divyamaan where he has used his imagination to bring out the utmost irony that is prevailing in various sectors like Politics, International Relations to name a few.

The story revolves around the group of friends Ravi,Param,Rohit,Prakhar and Karan who gave more importance to Counter Strike(CS) game rather than their studies. Despite their not so good attempt in exam preparations, they were surprised to see their names being featured in Top 10 when one of the semester results were announced.

On the other hand, the Indian Army which included Major Das, Brigadier Suryakant, Colonel Chauhan and Mehta were worried about the impending threat of take over of Indian Territories by Pakistan Army.

Surprisingly The Times of Bharat never carried this news and gave a small column only on their 30th page of some 120 odd page edition which was full of advertisements and the students group that were mentioned above took a vow to unveil the secret behind it. This leads to unveiling of various secrets and they eventually got the invite to meet Mr.N or Mr.Nation who was placed about PM and The President. Who is Mr.N?

The Indian Army gets the first victory by deploying DM007 method. What it is?

The book should be read as it is without giving importance or attachment to names being mentioned in the book which would make you understand the real irony. I must say it is really difficult for anyone to pen such a hilarious story without compromising on facts and quality and I thoroughly enjoyed reading it.