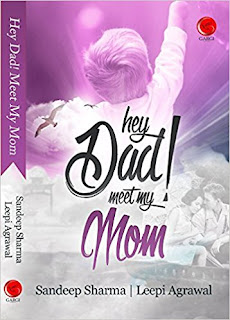 This book is a one of its kind with the story line which you would have not guessed it. Being authored by two authors - Sandeep Sharma and Leepi Agrawal, the story will keep you guessing till the end.

Puneet was the protagonist of the story who had great looks and a well paid Bank Manager job. He falls in love with a girl called Myra. He also has good friendship with Maya.

When things were about to get materialised with his engagement with her, Puneet sees his son Rishi who arrived from the future. You might ask if this is a Sci-Fi story. This isn't one but yes, he sees his son who talks and converses with him. Infact it is this son Rishi who made Puneet fall in love with Myra but now he wants his dad's decision to be reversed.

When Puneet tries to find out the reason, he stumbles upon a secret which was hidden from him for more than 10 years. What was he secret? Did Puneet and Myra ended up marrying each other is the story.

The story has some god logic and has never deviated from it. The events that takes place has complimented it really well in all the places it deserved. It would satisfy your expectation of reading a story which differs from others.