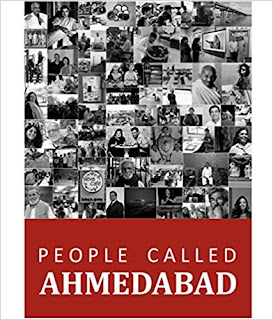 
The book is a compilation of 55 stories written by 17 authors. As they say, if you need to know about a place, you should not go there as a traveller but as a localite/wanderer. When I finished reading this book, I felt like that I have watched a complete documentary of Ahmedabad in Discovery Channel.

The book is a detailed description of the city Ahmedabad and unlike the other books, the book gives you a more perfect description of lot of things as this was penned by 17 different people. The book stands as a testimony that the collective presentation would never fade.

As a typical South Indian, my knowledge about Ahmedabad was very much limited except the fact that it housed some great educational institutes like IIM. When I completed this book, I got to know about lot of interesting things and characters which formed the essence of the book making me feel glad that I read.

Some of the excerpts from the book:

I came to now about Mujawar who are none other than the custodians and keepers of various tombs and dargahs. I was surprised when I came to know Emperor Ahmed Shah has married a Hindu tribal princess. He is addressed as Sarkar which is the title given only to Sufi saints of great esteem. It is also interesting to note that as long as the Manek Burj stands, Ahmedabad can never be destroyed.

The book also talks about delicacies here and there with one being Nahaari, a dish of Afghan origin which is prepared in few places. Barahandi is another traditional dish which is found in a restaurant in Kalupur.

Stepwells are the pride of Ahmedabad which are now declared as a heritage structure.The place called Morbi leads with ceramic production in India making India to be placed at 3rd in the world.There were few awards given to these production houses.

Gujarat houses third largest packaged tea company in India. The derivation of names for few of the places like Wagh Bakri and others were given in detail. While Gulbai Tekra is famous for Ganesh idols, Kubernagar market area boasts of many Sindhi sweet shops. The book also talks about the unity among Hindus and Muslims with few festivals being celebrated together.

The setting up of few institutes by eminent personalities and what made them to pursue their dream despite having greater opportunities is an encouraging factor.

Ahmedabad broke the World Record in largest potluck ever held in June 2016 with 1854 people participating in it?

Well, the review can go for pages because the book is a Treasure Trove with lot of information which would make you feel delighted to the core making it an interesting read from the beginning till the end.

I got this book for free. You can also get the books for free by joining The Readers Cosmos