The much awaited #Baahubali2 was released yesterday in India with almost majority of the theatres in South India was booked only for this movie. In Chennai alone, there were some 60 shows in 5 multiplexes which shows how much the movie is in demand which has gone beyond our imagination and expectations.

I received tickets for the 10:15PM show in Rohini Cinemas near Koyambedu,Chennai. When I went there, I was surprised to see the crowd even at that time. 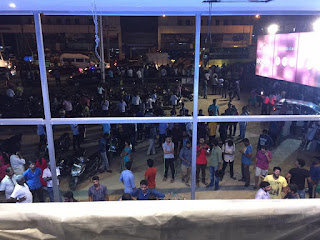 The theatre is undergoing renovation and still not complete. The theatre now has Dolby Atmos experience which I would talk about it in the coming lines. It also features 4K resolution screen which would give the viewer the ultimate experience. It has 7 screens in total and all the 7 screens were featuring #Baahubali2 movie. 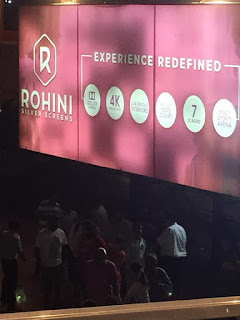 The interior of the theatre looks like this(captured inside Rohini - from the Balcony). Doesn't it look colorful and pleasant? 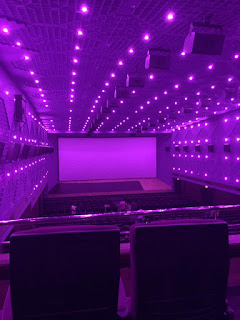 I was suddenly startled by the ultimate sound experience. I thought it started raining outside since there was a feather forecast of expected showers across the State. Then  realised it was none other than the #DolbyAtmos system which gave me that feel and effect. 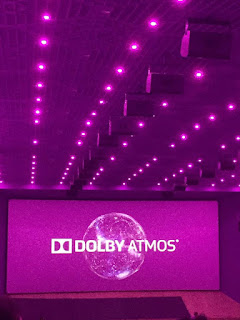 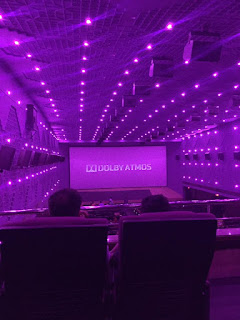 Only then, I noticed the speakers and sub-woofers across the centre and also on the sides. 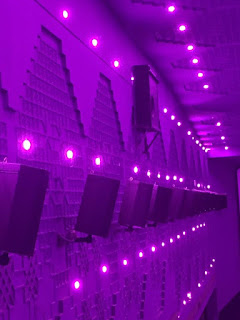 If you would ask me, the sound system played a vital role apart from the VFX in the movie as both Picture and Sound forms an essential part for any movie.

Now, coming to the movie.

The movie is a prequel to the previous part which was released in 2015. This movie however can also be considered a sequel since the later half showed Mahendra Bahubali avenging he death of his father Amarendra Bahubali.

The graphics played a vital role. The VFX is simply world class which gave so much positive vibes and upliftment in the first half of he movie ably supported by Prabhas and Anushka Shetty(who played the roles of Amarendra Bahubali and Devasena). Anushka was at her best and did proper justification to her role.

Songs weren't as appealing and good as he first part, to say honestly. Having said hat, this part did not actually needed any song since it was talking about some serious business. How Ballala Deva (played by Rana Daggubati) hatches a plot to demean Bahubali depriving of his status and position as the Emperor.

By the way, why did #Katappa kill Bahubali?

This is not a million dollar question any more since millions knows he secret now. Hence it is better to go and watch it in the theatres to know the answer/secret.

When the movie ended, we never realised we sat in the theatre for 2.5 hours. Baahubali 2:The Conclusion isn't a disappointment. It is certainly worth to watch for its VFX, story line, direction and grandeur.

It is recommended to watch it in #DolbyAtmos powered screens to grasp the actual effect which would make you feel surreal during the stunt scenes - some of which cannot be explained in words.