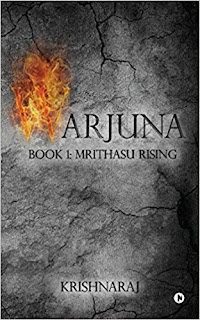 The book is a mythology fiction which draws references from the Mahabaratha which includes Arjuna, Draupad, Kanha(Krishna), Garuda, Hanuman among others.  initially thought it might be a story which would talk about Mahabaratha in a different aspect but I was wrong to a greater extent because the story has no similarities around it.

The story is a perfect movie material as I could instantly connect it with the Lord of the Rings trilogy and I am sure you would also accept my viewpoint when you read the book yourself.

What makes the story special?

The novel would never make you feel bored though there were lot of characters which is a bit difficult to remember but if you sit in one stretch and finish it by making a note of the characters and incidents, the connect would be awesome and you would fall in love with the book.

The book is just the beginning and I am not sure how many books author has planned to release in this series but I can very well say that I am now looking forward to the next release. This proves beyond the doubt that the book deserves the credit.

Coming to the story. I am not going to reveal much over here as I feel this is something similar to a very famous question - Why did Katappa kill Bahubali? where one need to watch the movie to find the secret and similarly, in this context, you need to buy the book to know about the story in detail.

Arjuna, the Prince of Wagharr was asked to travel by his Guru to few kingdoms for a purpose. He meets Mithasu who he felt was something more than a human. He plays a vital role in defending Ushka and other kingdoms from Hayacree attack.

He also faces danger in few places and gets saved by Kanha.

Who is Kanha? Why does he save Arjuna?

Mithasu gets killed. Who killed him? Who was the Traitor?

His father Apeksharan was revered across kingdoms.

The story is set to happen in the background of kingdom of Bharata which includes Avanti, Mathura, Dwaraka, Ashmaka, Ushka, Yushardan and Erahuz Dominion.

The story also has some fictional characters like Cheerakas, Suparnas.

If you love epics along with fiction, this is a must read.