1
Uncategories One person gets disabled every minute in India: Ratna Nidhi

One person gets disabled every minute in India: Ratna Nidhi 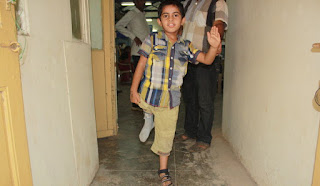 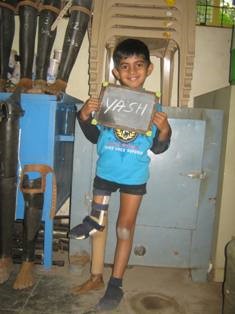 8 year Yash Chaudhri was one of the persons waiting for an extension to his unstable foot; before crowdfunding helped  Ratna Nidhi Trust fit him with prosthetic limbs.

Yash’s parents are just one, among many worried parents; whose children are born with a disability; and cannot afford to treat them.

Rajiv Mehta, Trustee Ratna Nidhi, who helped the family says, “ Yash was very confident about his abilities. He got engrossed in books, thought he was just like anybody else& did not want anybody to pity him for his condition. That's how all people with disabilities are. They need our understanding and support, not our pity. Conservative estimates of the World Bank and World Health Organization suggests that there are about 70-100 million individuals with a disability in India. How do we mainstream them?”

Rajiv Mehta’s Ratna Nidhi has received a grant from Google.org to develop 3D scanning software to scan residual limbs and print proper-fitting sockets for people in rural areas of India. Long before this grant, Ratna Nidhi’s mobility camps have been distributing callipers, Jaipur Foot, hearing aids and wheelchairs all over the country. Some of these camps have been in terrorism inflicted regions like Afghanistan and Leh Ladakh as well.

Experts say that one person gets disabled in India every minute. It is for these mobility camps that Ratna Nidhi uses crowdfunding to help as many people as possible. “As per a 2014 report by SaveLIFE Foundation in 2014, Five million people were seriously injured or disabled in road accidents in India in the past decade. Thats about one person per minute,” explains Rajiv Mehta.

Equipment’s to be provided are
1.      Fitting callipers to polio-affected children/youth
2.      Fitting of Jaipur foot prosthetics
3.      Distribution of hearing aids

Ratna Nidhi was founded by Mahendrabhai Mehta, declared Humanitarian Rose by the US Senate, a personal beneficiary of the world bank with a special consultative status at the UN. He was born in Antwerp, Belgium.

Over two decades ago he initiated the Ratna Nidhi Charitable Trust with financial resources from his own family and friends.Since then he has been a worldwide force to help children across the globe in a multitude of ways.