When the floods devastated Chennai in December 2015, it had literally shut down the source of income for many household. The effect was felt throughout Chennai as it did not spare even a single area. of individuals and companies involved themselves towards the upliftment of the affected class.

SMILE Foundation was one of the organisation that took the initiative to bring back the lost hope among the families. Though the organisation is working across various geographical areas, this time they established training centres in Mammandur, Salavakkam, AP Chatiram & Nelvoy road. Some 235 deserving women candidates from across 12 villages were identified and were given stitching training under Project Thiramai.

As a part of the project, an event was organized on 10th May 2017 where all these 235 women were given certificates and sewing machines to self sustain and support themselves. The event was attended by dignitaries from the State Government. The members who were present in the event were:

Speaking about the initiatives, Mr Sanjeev Dham-COO, SMILE foundation thanked Pepsico for their support in supporting the initiative which saw how the women whose families were affected by floods and other natural disaster willingly came up to take part in the drive thereby enhancing their capabilities to stand up on their own legs. He further added that the initiative was unique and saw the participation from physically challenged women too. Through Project Thiramai, training has been given to women across the four training centres and n successful completion, certificates and sewing machines were given to the candidates.

Poonam Kaul, Vice Preisdent - CSR, Pepsico India noted that the company feels proud in supporting such an initiative which has seen the rise of women from economically weaker section. Pepsico has joined with SMILE foundation to support these women across Kancheepuram district from various villages and by making women learn stitching, it would enable them to join the garment factory companies which are in abundance in the area. The decision was taken after considering the employment opportunities post training which has helped hundreds and thousands of families. The foundation has been doing three initiatives namely Smile-on-Wheels healthcare vans, School Cleanliness and Project Thirami.

Under Project Thiramai, the women not only gets trained to stitch but also were given training to repair the and maintain the sewing machine themselves. The training period is for 3 months. Along with the training, these candidates were also taught about Yoga, Meditation and also given awareness training on obesity and nutrition which would help in eradicating the poverty.

Pepsico has been taking part in the growth of Tamilnadu since 1989 which has 5 manufacturing plants across the State. Through Production, Sales and Distribution it supports 15,000 families and for the better yield of food grains, the company has already joined hands with more than 400 farmers and working with them. By doing this, the company has helped them save more than 30% of water and the highlight to this is the savings of 1.5 billion litres of water that has been saved in the year 2015 alone by these initiatives.

When the floods devastated Chennai in 2015, Pepsico had deployed its Sales unit and those who are employed in their production unit to take part in the rescue operations. The company has also supplied more than 1.4 litres of Aquafina purified water along with 38,000 kilos of Quaker oats. 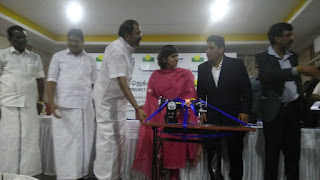 Minsters M C Sampath and P Thangamani spoke about the initiatives  wherein they lauded the company and the foundation for doing the great work. They said they look forward to their contribution and continued support enriching the lives of many families.
The event concluded with the distribution of sewing machines to all the 235 women who has completed their training.

Team of newspatrolling.com personally attended the event and the post is in collaboration with PepsiCo .