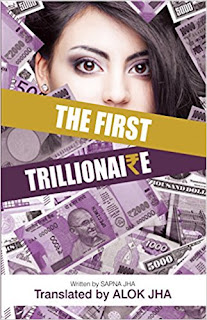 An excellent story that I have read in recent times. I was surprised in the first place that the story was written in Hindi by Sapna Jha and has been translated by Alok Jha. While I have not read the Hindi Version, I am sure, the English Version has produced the story intact.

The story begins with Sahil, a simple girl who clears IBPS exams and joins East India Bank. She is a devotee of Goddess Durga and wanted to donate big amount to Vaishno Devi and other temples for which she wanted to earn and become the first Trillionaire.

The idea was sparked in her mind after she reads about the total wealth of the World and she wanted a portion of it. She had a tough childhood with no memories about her Father since he was dead even before she was born an her mother faced all difficulties as a single mom to raise her.

Things took a different turn when she befriend a stranger on Facebook who started pouring money as and when Sahil wanted. Who was she? Why did she start sending so much money to Sahil?

On the other hand, Sahil confronts a local don who kidnaps her for ransom. Only then the World comes to know who Sahil was. A rescue mission was underway on the behest of Kran who was the founder of "Near Earth Miners and Space Voyagers".

Why would Kran get into the rescue mission being a multi billionaire himself and who this Facebook friend of Sahil?

Read this story which would keep you hooked from the beginning till the end.