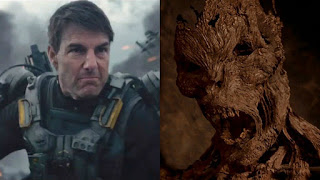 The Mummy - much awaited movie has been released in few countries already and is getting released in India tomorrow - 9/6/17. I had an opportunity to view the "Preview Show" in a multiplex. Though there are two versions available, this multiplex screened only the 3-D Version. There is no complaints about that because the picture very much warranted the 3-D effects.

Coming to the movie. It wouldn't disappoint you for sure but having said that, it may not make you say wow because the very first movie is still the best,according to me. However, I do not believe in comparison and since this story is set in a different place altogether unlike the ancient Egypt, I would say that the movie has doe a complete justification to the story line.

I wouldn't talk about the story in this blog because it is already out there on various websites and I also do not believe in revealing the story line making it a spoiler. Tom Cruise has yet again proved as to why he is a Superstar. Picturisation,3- and VFX effects were too good. I was also expecting the usual sandstorm and the movie did not fail to live up to my expectations.

The story line is good where an evil woman arises from the mummified tomb.

What led to this?
Who was responsible?
Why was she mummified in the first place?

These are the things which you need to find out by watching the movie and I would surely recommend a 3-D version. I would also suggest not to take your kids especially when they are less than 10 years for sure as here are few scenes which might disturb them as I found it scary(not for me though)and it may scare few elders too ;-)

Alex Kurtzman has delivered a decent movie. For Tom Cruise fans, this is a good entertainer.