Bring Smile - A Campaign which can make a difference 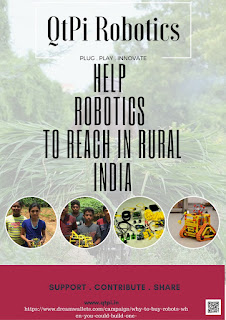 We come across many campaigns day in and day out. They differ from one another in terms of ideas and execution. We would have donated to few of them without even knowing whether it is solving the purpose or reaching the real beneficiaries. However we do this on goodwill and as a good samaritan, we have all the rights to get to know as to where exactly our money goes or being spent.

Campaigns related to hunger, floods and other natural calamities are a common one in our country but have you ever thought about bringing smiles in the face of kids? While there are few which is related to kids are found online, they do not deal with enhancing the kid's knowledge but mainly to address their basic education and food(hunger) in most of the cases.

Here, I present to you a campaign which is making waves. The campaign has been started by QtPi Robotics which is a Bengaluru based company. More about the company and its functions can be found at the bottom end of this post. They came up with a special initiative where they wanted to pick up the bright students or to put it in other words, students who have visionary thoughts and knowledge but never had the chance to bring it out of them to exhibit it to the outside world. Most of these students are confined to Govt funded/aided schools where the resources are not available completely, all the time. These students mostly hail from Rural India who come up with very many innovative ideas since they would have either witnessed it in their locality or would have thought about it "Would it not be better, if things were done this way?"

We need not have to go to Urban area kids as it may not be relevant to this context since they have very many opportunities and avenues. Hence QtPi Robotics came up with Crowd Funding concept where through the funds raised, it would help the kids from the rural areas who were identified based on their ideas and knowledge and help them realise their dream. This does not require a major contribution but even a mere Rs.100 would go a long way which would help in sponsoring for the robotic course to the underprivileged in Rural India. In return one would not only get a shout out from the company on Social Media but also a sense of satisfaction that their money has gone towards a noble cause.

A simple contribution by sacrificing a coffee in a swanky coffee shops can help a child realise their dream. The campaign has so far raised Rs.43,700 from 37 backers which is close to 15% of the total target funding of Rs.3,00,000 with just 19 more days left.

You can make a difference by clicking this link -> https://goo.gl/ZfFKWi

Be the change India wants to see. Jai Hind!!

QtPi Robotics is into space of building ecosystem for children/kids to build robotic projects. QTPI Robotics is entirely designed and built in house by veterans from Software, Mechatronics, and Integrated Chip industry. A proud “Make in India” initiative.