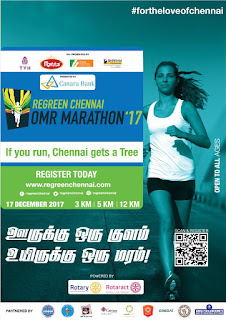 Cyclone Vardah that hit the East Coast on December 12, 2016 was a green disaster for Chennai. More than a lac of trees were either felled or destroyed, seriously damaging Chennai’s green cover. Temperature levels have risen as a result posing new challenges to public health, drinking water security and food security. Coupled with unplanned urban expansion, air-conditioners, destruction of water bodies and marsh lands, this crucial loss of green cover further increases the disaster vulnerability of Chennai.

Re-Green Chennai is envisioned as people’s participatory movement involving widest possible stake holders, replant a Million well grown saplings, while in the process creating massive awareness about urban disaster risks and ways to be prepared for them, creating a pool of technology and information enabled disaster volunteers in multiple locations, and bring in personal attitude changes that in the long run will critically contribute to urban disaster risk reduction.

PROGRAM, NOT JUST A PROJECT

ReGreen Chennai is a ten years program. A healthy environment requires a green cover of 33%. What Chennai had before Cyclone Vardah was just 4.5%. Post Vardah this has further got eroded. ReGreen Chennai would join the initiatives of the Govt, Corporation of Chennai and several non governmental organizations and strive to reach the target of 33% green cover in ten years, along with creating sustained awareness and action towards rain water harvesting, waste water management, general water resources management, and support to suburban agriculture.

WHAT REGREEN CHENNAI ENVISIONS TO DO

uPlanting a million well grown trees in five years in the districts of Chennai, Kanchipuram and
Thiruvallur.

uPlanting a million seeds along the - Adayar, Coovam and Kosathalayar rivers and all
water bodies of these districts. trees are excellent flood walls and their economic benefits are many.

uPreparing and spreading 2.5 million seed balls in the next five years, in the districts of Chennai,
Kanchipuram and Thiruvallur.

uOrganizing technology, human and financial resources to pursue the vision plans in a systematic manner.

WHY THIS PROJECT WILL SUCCED

uComing together of many accomplished civil society organizations as joint stake holders. So far 27 organizations are part of the ReGreen movement.
uThe project was launched on July 07. Thus far 55000 trees have been planted and 21 seminars conducted. The ReGreen program has gained traction.
uPeriodic review and consultative meetings. So far more than 20 such meetings have taken place.
uMore than 250 volunteers, committed and experienced, have already enlisted themselves to the initiative.
uMore than 500 Schools and Colleges have been already lined up us confirmed participants in the project.
uLong term vision.
uCore operational team has evolved.

WHAT WE HAVE DONE THUS FAR

The core vision was formulated in January 2017. Since then more than 20 discussions, colloquiums, seminars have been organized to define and design a road map for the effective and purposeful orchestration of the ReGreen Chennai project.

This nursery, specially created to make saplings easily accessible to people, can hold up to 12000 saplings at a time. Similar such nurseries would be established in various regions and locations of the city.

Actual tree planting movement began on July 13 with a ReGreen seminar for the Eco club students of Holy Angels matric HSS,T.nagar, followed by tree planting. Mr.Deivasigamani, President of the Farmer’s Federation and actor Ragava LawrEnce planted the first sapling along with the students. Since then many schools including the Vidyodaya school campus which Jewel of India Rabindranath Tagore once visited and called it the ‘Shantiniketan of the South’ have been covered.

Every day a minimum of two Schools or Colleges get awareness talks and tree planting. The momentum keeps building.

IN MEMORY OF DR.ABDUL KALAM

Students of Maharishi Vidyamandir, Sri Sankara Vidyalaya, and organized a Relay Tree Planting exercise on July 27. All in all 15 School’s participated.

STRENGTHENING THE POOL OF VOLUNTEERS

Volunteers play a defining role in making a movement successful. Hundreds of students have been enrolled. What we see here below is the motivational session for the volunteers from . The Faculties too are well aligned.

Regreen Chennai believes that the suburbs hold the key to Greencover. We have earnestly started the mission in places like Nedunkuntram, Minjur, Perungalathur, in partnership with local NGOs.

Tree Planting along the bunds of lakes and water bodies achieve many function. It strengthens the out layers, preventing seepages and even disasters. Importantly it brings in people’s direct involvement that plays a check on encroachers and reckless realtors.

REDISCOVERING THE
is ideal for TamilNadu. It lives 100 + years, doesn't need much water or upkeep. And it’s a tremendous source of livelihood for rural poor. We have collected thousands of seeds to be laid along lakes and water bodies.
We envision to plant a million seeds in five years.

C.S.I Ewart Mat. .
of Engineering.
St.Thomas Mat. .
Women's . Month of August witnessed huge momentum building up, particularly during August 15. This momentum is further being accelerated keep the onset of monsoon as important moment for tree planting.

ReGreen Volunteers dug a model small pond on September 24 at in Vandavasi. Providentially it rained just after we dug the pond. With one hour rain 5 Lac liters of rain water was harvested. This could be a game changing model for water harvest management in TN. ReGreen Chennai intends to escalate small ponds in the Chennai suburban areas.

WE NEED YOUR SUPPORT

Visit www.regreenchennai.com today to register for the Marathon. Your participation can make a difference.