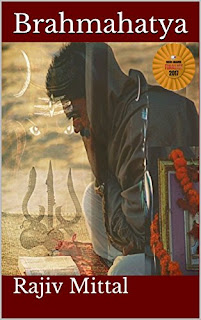 
Brahmahatya in Sanskrit translates to "the act of killing a Brahmin. Well, the story is based on this theme. Firstly, I liked the cover as it very much correlates with the novel and after finished reading it, I was not surprised that it made it to the "Finals of 2017 Self Published Books Awards".

Author has touched upon the sensitive issue - Religion and he has drawn references from Bhagawad Gita and few other Hindu spiritual references which has blended with the characters/story in a perfect manner. These references were used in such a way that, you end up learning more than you would have ever thought.

The story revolves around a caring son - Ravi Narasimhan. Though he was working overseas, all the time, his thoughts were tied to his ailing father.He did his level best to keep him happy but when it was about to get him admitted in the hospital, things takes a different turn. He gets to see the real world which is demanding and selfish. In order to keep him in the safe hands, he tries to get him admitted in the elder care home called GMR but his admission gets refused.

Eventually, he had to feel contended in getting him admitted in "Blessings", a not so renowned elder care home where his father passes away. It is then, he decides to impersonate his father.

Why did Ravi decide to impersonate his father?
Did he manage to do it?
Was the mission accomplished in the end?

Read this novel which is no less than a thriller. Though it is a bit slow, the references sourced from the Hindu scripts and the way in which this novel is penned would keep you captivated till the end.