Book Review - The Shrine Of Death 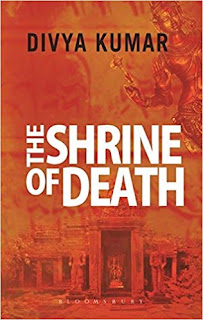 
Idol theft is a serious offence not only in India but across the globe. This is pretty much rampant in India due to various reasons like lack of documentation corresponding to respective temple/shrine,  no regular audits being carried out(at least in the past decade or so), ignorance among the officials who is suppose to safeguard, greediness etc to name a few. The release of this book couldn't have come at a better time when the State of Tamilnadu is already battling the smuggling of these idols which has seen a fierce battle across various fronts.

These idols which were made of various metals has seen its value grow up by leaps and bounds due to the history associated with it. There was no surprise when couple of bronze idols go missing in the story and Sneha Pillai, who use to be a good friend of the protagonist, Prabha also disappears after making a brief phone call to her.

The suspicions falls on few but most primarily on Jai Vadehra who belonged to the affluent Khandelwal family. Though he never showed any signs of greediness, his murkier past was so much against him. There were another characters like Anirudh, Rahul, Rita Banker, Professor Sharada, Subha, Chinna Thambi, Dr Kunoor in this long but interesting novel and each of them had done justice to their roles. As the suspicion gets shifting from one person to another, Prabha too gets attacked.

Why was she attacked?
Who was the real culprit?
What was the motive behind all these which included a murder and couple of murder attempts?

Read the novel to find out more. I must say that this novel is a captivating thriller...


This book is available on Amazon and other leading online/offline stores.