Book Review - Growing Up : A book of poems 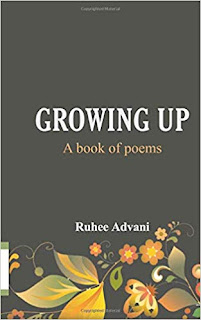 Growing Up is a collection of poems written by Ruhee Advani. The book is divided into two parts:

There are 74 poems in total with the first part having 27 poems and the second part having 47 poems. I must say that each and every poem was unique. Some caught my attention for the meaning, it conveyed. Though these poems were short, the meaning was universal and powerful.

In the poem called "Chameleons", I loved the 4th and the 5th line which goes like this

"Time's the painter
And change is the game"

How true those lines were...

The very next poem to the one mentioned above was "Ups and Downs" in which I liked the last 4 lines, in particular.

While some poems were real long, Ruhee showed a contrasting difference by penning a 2 line poem(similar to an haiku though Haiku has 17 syllables with three lines of 5, 7 and 5).

The poem I am referring to is "Maybe"

They say words are powerful and the pen is mightier than a sword. You could feel and vouch it,when you finish reading these collection of poems. I think, it is enough said...

This book is available on Amazon in both paperback and ebook format.