Book Review - Where Will Man Take Us? 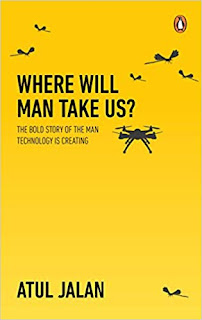 A brilliant attempt which is not about the usual topic you would have read or come across so far. What I liked the most about this book was, it wasn't a conventional though it talked about it. The book will take you to the future(to some extent) and author's ability to foresee makes this a revolutionary one.

Being into technology himself, author's vision is clear. He discusses in great detail about the pros and cons of technology. Most of them were beneficial but how they were put to good use,is all that matters. The book is divided into five sections namely:

Each of them were subdivided into various chapters. There are 26 chapters in total.

The book talks in great detail about Nano Technology, Artificial Intelligence, Quantum Computing, Genetics, IOT, Block Chain Technology, Bit Coins among others. As you could see, these are the most happening topics/sectors/technology in the present era.

Author has used the quotes from eminent. I would like to quote just one(among few ten's of quotes being used)

J.P.Morgan said "Money is Gold, and nothing else"

Pariser says " Your computer monitor is a kind of one-way mirror, reflecting your interests while algorithmic observers watch what you click"

I also came to know that Sir Isaac Newton was the master of Royal Mint.

The definition of Money was too good to be true as it is used as a Medium, Measure, Standard and Store.

The book is a treasure trove of information. I would like to quote a few which I found it intriguing.

The sword of Tipu Sultan was made of Damascus Steel(as per the legend).

Quantum Entanglement spooked Einstein who called it "Spooky action at a distance".

Things behave in a different way when they are in its Nano form. Under "Quantum Tunnelling", we have already shrunk the transistors to maximum. If we need to make our computers even smaller and more powerful, we need to look elsewhere. How true these words are..

Atul says "What was Sci-Fi in youth is "Sci" in my middle age".

In this new age, Cyberbalkanization will make us islands - will make opinionated, absolute islands and perfect, dangerous arsehole notes the author.

The book is revolutionary and visionary. Author has compared the past with the present and predicts what would be our future. Most of them are very much feasible to be implemented. There are no exaggerations. The style of writing was simple yet effective putting forth the point which the author wanted to drive. The book talks about various topics in great detail. Author has done a great research in bringing all the facts and information in one place, making it an interesting and compelling read.