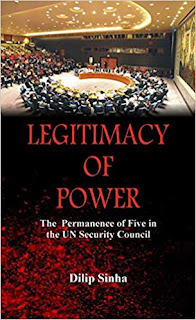 United Nations has played a vital role in maintaining the world order and peace ever since its inception. The formation wasn't a cake walk and the journey it has undertaken till date has been captured vividly in this book.

Usually history is boring as it is all about the real facts that has happened over a period of time but at the same time, if it is presented in an interesting way, like a story, no one would want to miss reading those. Dilip has done an excellent job in bringing out most of the facts and figures in an interesting format.

The book is divided into 16 chapters namely:

Honestly speaking, I had never come across a book that talks about a global body in such a detail. The content is crisp and is written in such a way that you wouldn't want to miss reading all of it in one shot. If you love history or international relations, you would surely find this book, a real interesting one.

Though I have read about U.N. during my schooling, all those I have read back then would easily fit into a single chapter whereas this book, as mentioned above, has 16 of them. The content is so vast that even if it used as a reference for a doctoral program, I wouldn't be surprised.

Coming to the review. What did I like the most from this book?

1. There are so many snippets in this book which would surprise you. It is imperative for you to sit with a pen & paper to make notes since history is all about facts, dates and figures.
2. Each and every chapter has been discussed in detail with suitable end notes/references being mentioned which could help you to cross check/verify, if you need to.
3. The need for formation and the evolution has been captured in a candid format.
4. I loved Chapter 5 in particular as it crisply captured as to how many times the Veto was used, Number of Resolutions adopted etc over 4 different periods which is 1945-1969, 1970-1990, 1991-2011, Oct 2011 till date.

I too, like a commoner, was not aware of technicalities and how much the other nations struggled to form the U.N. Though it is a global body which is backed by Super Powers, formation wasn't a cake walk. It has to go through testing times on various occasion and has survived the difficult tides through compromise and co-operation. It would be really apt to say that the mere presence of the U.N has averted great many dangers/wars in the past decade or so...

This book is available on Amazon in Hardcover, Paperback and eBook formats.