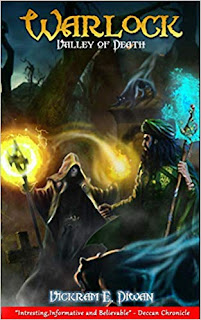 This is the sequel to the earlier release under the same main title - Warlock. If you have read that book, you would have surely been waiting for the release of this book. Vickram has once again delivered the best through this book. Usually the sequels would be not that interesting or appealing but this one has exceeded the expectations, for sure.

The book has a real good outer cover which gives you an idea as to what this story is all about and as you could read from the synopsis, this is a war between two - Warlock who is the master of Satanic black magic and Indian Tantra and Bharoo Shah Bengali, who is blind by birth but a master Sorcerer.

Payal, an unsuspecting actress/model falls in the clutches of Warlock.

What did Warlock do with her?

Warlock had another face during the day. What was it?

Abhay, the husband of Payal gets attacked by an unknown force. Who had sent that force and why?

Who emerged victorious among the two sorcerers in the end?

Read this supernatural thriller which would keep you captivated till the end.