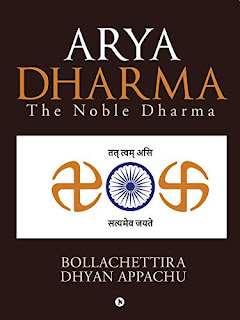 A book which is the need of the hour.

What is so special about this book?

The contents of this book are not the usual one. It is a 600+ page which needs detailed study. Hence I would suggest you to read few pages only, in a day. I was totally amazed because the book is a confluence of most of the religious texts/books/literature since author has mentioned that he has read the religious book more than once.

I do not know the possibilities of application of a book to a greater extent but if it was done, it would surely lead to a Utopian Society where there is no religion and all the subjects would be following the highest order of Dharma called Arya Dharma.

There were lots to learn from this wonderful book. I am trying to mention few of them which I found it interesting/appealing.

Do you know?
The left facing Swastika has Buddhist origins but this was not completely true. It is the embodiment of Shakti and also the representation of the essential feminine qualities.
Dharma Chakra – has origins tracing back to Vedas and Buddhism.

Author is critical about FUKUS system which we have been following despite the fact that the rules we followed earlier were of highest order. We, The Bharat were much prosperous and were contributing almost 1/4th of the World GDP which could not be conquered even by the Great Alexander. We should feel proud about our ancestry since we were most civilized for more than 1200 years when the other races were barbaric. You should make a note there that author is not a racist but was trying to put forth his point.

Arya is not a race by birth. Arya Dharma was followed by the then Indus Valley Civilization which is now in Pakistan, Bamiyan Buddhas in Afghanistan, Combodians etc.,

Arya Dharma is an embodiment of Sanathan Dharma, Buddhism, Jainism, Sikhism, Marthoma, Sufism and religion of the tribals. The Worship of nature is the true and pure form of the highest embodiment – Brahman.

The book is not about Hindu or Hinduism alone but it also about other religion. Most importantly, it is devoid of people who have manipulated it for their own benefits/welfare. Hence you can safely say that this is not biased towards any one particular religion.

It is this Arya Dharma which has made Lord Ram to banish his pregnant wife as he was criticized by a dhobi. It is to be noted here than an ordinary citizen could criticize a Supreme ruler. Ram Rajya meant the rule of Dharma of which Lord Ram was the best and supreme embodiment. Dharma is beyond Religion.

These were just some of the interesting anecdotes I found in this book. I liked the writing style of the author since he did not beat around the bush.

Do you know that the Chinese philosophy is very much similar to ours? It has the same ideal of the Vasudhaiva Kutumbakam which means “The World Is One Family”. This is not just found on one of the scriptures of Sanathan Dharma but also in Upanishads, Panchatantra, Hitopadesa etc.,

Author expressed his emotional feeling (read Sadness) that the best source of ancient Bharat in English are not in Bharat but in the good universities and libraries in USA,UK, Russia and Germany.

The Caste system that existed during the Vedic era was mostly misunderstood/misconstrued. By trying to decode this, author has done an excellent job. As a subject of this great Nation, I feel really proud. Do not miss to read about Varnasharma Dharma.

Birth does not determine the caste but their action. This is how Valmiki, who was once a robber, became a Maha-Rishi. Vishwamitra who was a Kshatriya by birth became one of the Saptarishi.

The author has given good ideas on how to reform our existing flawed democracy and capitalism systems based on his research on ancient democracy in Bharat.


He has also proposed an alternate and in his opinion a more sustainable model of growth and prosperity that is suitable to all beings in this world and also complements nature.

Well, I can keep writing about the book all through the day because the wisdom it offers is immeasurable and what I have written in my review is not even 5% of what the book has to offer. If this is followed strictly, I am sure there will not be any difference between the people which is the basis of all the conflicts. Don’t we all want to see a peaceful world which follows the Supreme Principle which was very much followed in our nation earlier but time and tide coupled with petty politics has slowly made this to vanish from our system?

This book is available on Amazon.