Book Review - Shall we Tango, Charlie? 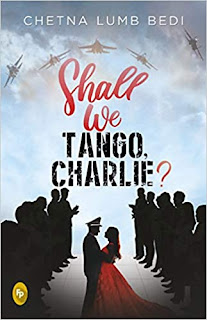 There are only very few books out of hundreds and thousands out there which celebrates womanhood and portray the character as a protagonist. This title is one such and unlike others, the subject that was handled in this beautiful novel is about the lives of the women who chose an unlikely profession – to be in the Indian Air Force.

This story discusses in great detail about the pressure and other unlikely circumstances which the women has to go through in the job which begins with vigorous training and how they brave it and overcome. I loved the way the story had flowed from the beginning till the end which shows the two faces of a woman – Soft and Hard nature.

Ahana Lamba gets selected along with Dana Dixit, Priya Shetty and few others to be inducted as a Garud Commando in the IAF (Indian Air Force). Though she considered Dana as her arch nemesis, they soon become good friends and complement each other when the training was imparted. Priya Shetty on the other hand was a soft-spoken girl whose grit was brought out by Ahana and Dana.

Ahana had lost her parents and was raised by her Uncle Ranjeet and Aunt Shashi in the U.K. She has a carefree attitude and is an expert in Krav Maga and other Martial Arts. Dana too had lost her father and her uncle considered her  as a disgrace since he never thought that she could make it to the military force (since her entire lineage served the Indian Military in various capacities).

When they were getting trained up in BTI, Wing Commander James Matthews tries to act smart but he gets it back royally from Ahana.

What did she do?

Ahana was suppose to become the first ever female Garud Commando but chooses to extend her training at GRTC for another 40 weeks.

Why did she choose to extend it?

Wing Commander Tej Randhawa was heading GRTC and Ahana gets trained by Flight Lieutenant Suri who was nick named Maverick by Ahana. This 40 weeks of extended training with each of the 10 training – in Desert, Jungle, High Altitude, Paratrooping and others were such an intimidating task to clear.

While everything was going fine, Ahana meets Aamir Hussein under an unusual circumstance. He and his girlfriend Miriam become close to her. There was some hidden secret behind Aamir.

Like I mentioned earlier, this book has the right proposition of all that is required for a novel and will have you captivated from the beginning till the end. I would surely recommend this novel.

This book is available on Amazon in paperback format.