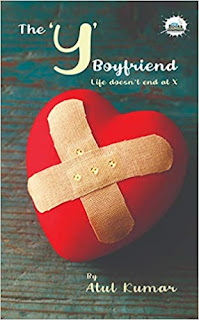 Title - The "y" Boyfriend : Life doesn't end at x
Author - Atul Kumar
Genre - Fiction
Publisher - MyBooks
ISBN - 978-8194-8-32362
Life isn't easy for a divorcee irrespective of who it is. This is even more cumbersome when the affected is a woman. This story revolves around two characters - Shreya & Rahul, both of them are divorcees. The turbulent mindset and the situation they go through especially when they are going through a divorce is captured really well in this novel.
While Aashna was in a long distance relationship with Rehan, she was in dilemma as to how would the long distance relationship works. This is where Rahul, father of Aashna comes into picture and starts describing about how he and her mother Shreya had actually met which in itself was a long distance relationship which eventually fructified.
Aashna was actually shocked to hear the story of her parents. Though they were divorcees in their life, what made them to take that decision and how eventually they had met their soul partner online is described in a vivid manner.
The characterization and the way story progresses would make anyone shed tears. The kind of humiliation which Rahul has to go through for no fault of his and Shreya being manhandled by her ex husband shows how these are rampant in our country and how most of them are hidden but does not come to the limelight.
The meeting of Shreya and Rahul is an interesting aspect. The story revolves around long distance relationship since Rahul was in Dubai and Shreya is in Delhi.
How and where did they meet?
Did the long distance relationship work in this case?
This book is certainly one of its kind since it spoke in great detail about lot of aspects including long distance relationships, divorce, remarriage and the troubles which a couple of soul has to go through to seal an everlasting relationship.
The book is certainly an eye-opener since it gives you the microscopic analysis of the testing times some of the genuine people has to go through for no fault of theirs and should bring about a change in a miniscule in the society, if not a complete changeover... A women empowerment story is what I would say....
This book is available on Amazon