Book Review - Raising Hell For Peace : A Crusade by the Brahma-Kshatriya 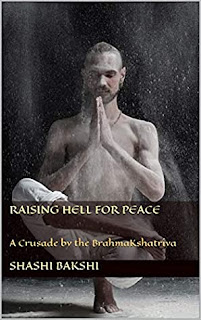 Title - Raising Hell For Peace : A Crusade by the Brahma-Kshatriya
Author -Shashi Bakshi
Genre - Fiction(Thriller)
Publisher - Shashi Bakshi
ISBN - 979-869-077-0716
This is a fast paced socio-political thriller which would keep you captivated till the end. There are lot of events which had happened in the real life which has been incorporated in this novel in a real effective way. This includes:
9/11 Attacks
Indian Parliament Attack
Allahabad train burn incident apart from other important events like
NPR and CAA
Kamala as VP of U.S. to name a few.
The novel would make you retrospect irrespective of your political leaning or ideologies. This is the need of the hour since if you side with one - be it Left Wing or Right Wing without knowing their ideologies and when you are given the power, those ideologies shouldn't act as a deterrent as to what you truly are.
This is what happens with Balraj who is entrusted with upbringing of Deshbhakt by Guru Satyanand of The Indo Aryan Pride Organisation(IAPO) who believed that Desh is the Avatar or Kalki and in order to understand his fullest potential, he needs to be handed over the relic.
While Desh had a full backing of IAPO, he meets Aryabhat in the IIT,Kanpur and they become close friends. They had a gang of friends which included Kamala, Baozhai among others. While Desh was indulged in protests, Arya excels in his studies and fetches a full scholarship in Princeton University where he meets Katrina. Aftre going to the U.S. Arya loses touch with Desh.
Desh becomes the C.M.of U.P. twice and when he was facing the election for the 3rd time to the C.M.'s office, he gets to meet Arya who has become a political analyst and advisor to few other States. This character reminded me of PK in the present Indian politics. Don't tell me that you do not know who PK is.....
What did he do to make him win the elections?
Then there are riots. Why did that take place?
Then there was a rift between Arya and Desh. What had caused this rift?
Did Desh get the relic? If yes, did it manifest his powers?
This novel talks in great detail about how the politics is conducted and how the nations in the West like Italy(read it as Vatican), Russia, U.S. try to influence others through their plans and how the intel is gathered and the reasons as to why acts like sabotage, phone tapping, intel etc., are done and how it is done.
The book also talks about the racism which prevails even in this 21st century.
A must read irrespective of your political leanings and is a perfect fit if you are searching for a socio-political genre.
This book is available on Amazon in Paperback and eBook formats.