Sarath Babu 17:27 Events and Movies Others 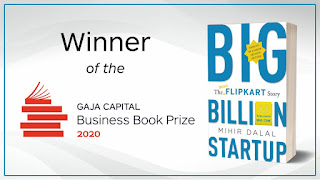 Mumbai, Thursday, January 21, 2021: Big Billion Startup: The Untold Flipkart Story, the definitive account of the biggest start-up that redefined India’s e-commerce, by investigative journalist Mihir Dalal has been announced as the winner of the Gaja Capital Business Book Prize 2020.

The winner was selected from an eclectic and compelling shortlist of six books, showcasing the vibrant Indian business ecosystem. Established by the Gaja Capital last year, a leading equity firm, the Gaja Business Book Prize is one of the leading initiatives connecting the worlds of business and writing. With a purse of INR 15 Lakh for the winner, it is the biggest business book prize in the country to honour authors and their chronicles celebrating the spirit of entrepreneurship in India.

While announcing the winner virtually this year, Gopal Jain, Co-Founder and Managing Partner, Gaja Capital, said, “The Indian growth phenomenon – is one of the great stories of the 21st century. It needs to be told. Narratives inspire and build conviction - India has many successful entrepreneurs and businesses. The world should speak of them just as we speak of the world because you don’t have to be Western to be Modern. As Investors and entrepreneurs in the Indian market, we have witnessed several such journeys first-hand. The Gaja Capital Business Book Prize was instituted in 2019 to encourage Indian writers, journalists and entrepreneurs to tell our stories and tell them well, for the world.”

The jury for the second edition comprised stalwarts from the worlds of industry, investments, academia, public policy, and governance including:

The 2020 shortlist consisted of a diverse range of stories of enterprises and their protagonists including : the Unicorn story of Flipkart in Big Billion Startup by Mihir Dalal; the exposé of Ranbaxy in  Bottle of Lies by Katherine Eban; HDFC Bank’s digital revolution in HDFC Bank 2.0 by Tamal Bandyopadhyay; the riveting account of Bigbasket’s leadership in Saying No to Jugaad: The Making of Bigbasket by TN Hari and MS Subramanian; the 70 year journey of Hero in The Making of Hero by Sunil Munjal and the bold and adventurous journey of a Venture Capitalist in India in The Moonshot Game by Rahul Chandra

“The 2020 edition of The Gaja Capital Business Book Prize has had an extraordinary list of submissions featuring an outstanding list of books, and our shortlist featured a brilliant range of stories of Indian enterprises and their protagonists. In addition to the narrative power and research behind these individual stories, the jury also considered how these outstanding chronicles can inspire and educate young entrepreneurs - and were unanimous in choosing Big Billion Startup by Mihir Dalal as the winner of the 2020 Prize.

Through this incisive and deeply researched book, Mihir Dalal aims to answer the critical question: What will the internet economy in India look like? The Flipkart story reminds us that Indian entrepreneurs will forge their own independent paths of innovation serving a diverse and very demanding Indian consumer.

Mihir Dalal gets under the skin and takes no prisoners. This is a must read.

Mihir Dalal recounts the astounding story of how the Bansals built Flipkart into a multi-billion-dollar powerhouse in the span of a few years and made internet entrepreneurship a desirable occupation. But it is also a story of big money, power and hubris, as both business and interpersonal complexities weakened the founders’ control over their creation and forced them to sell out to a retailer they had once dreamt of emulating. Flipkart’s auction involved some of the corporate world’s biggest names, from Jeff Bezos, Satya Nadella, Sundar Pichai to Jack Ma, Masa Son and Doug McMillon, an ironic testimony to the strength of what the Bansals had once forged. Based on extraordinary research, extensive interviews, and deep access to Flipkart, Big Billion Startup is the riveting and revealing account of how Sachin and Binny Bansal built and sold India’s largest internet company.

Mihir Dalal is an editor with Mint, from where he has covered internet businesses for more than five years. He previously worked at Reuters and CNBC TV18. He was born and brought up in Bombay and currently lives in Bangalore. Big Billion Startup is his first book. A leading production house is adapting the book into a web series.

One of India’s premier mid-market focused private equity firms, Gaja Capital provides growth capital to ambitious entrepreneurs to build the future champions of Indian economy. Through its specific, methodical and consistent investment strategy, Gaja has an established track record of delivering strong performance since inception and has positioned itself as a partner of choice for emerging companies and leading global investors in India. Gaja Capital was founded in 2004 by Gopal Jain, Ranjit Shah, and Imran Jafar—a group of seasoned indigenous professionals with an established track record of investing and operational management in India.  The high calibre of leadership, investment and operating expertise within the Gaja's core team has enabled it to deliver tangible value beyond capital to the entrepreneurs it has invested in.

The last two decades demonstrate that Indian business is telling new stories and finding new paths. The chroniclers of Indian business stories endure painstaking efforts to capture the romance, struggle and joys of entrepreneurship. The Gaja Capital Business Book Prize is created to honour these travellers, their journeys and their chroniclers.  Awarded annually, the book prize recognises best narratives on an Indian company (or an entrepreneur or some event) that transformed the business ecosystem in India.