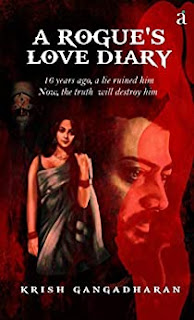 Title - A Rogue's Love Diary
Author - Krish Gangadharan
Genre - Anthology/Romantic Thriller
Publisher - Author's Ink Publications
ASIN - B08T8B78W9
An unusual story which takes you all the way from India to USA and Australia and as the sub title mentions clearly, "16 years ago, a lie ruined him. Now, the truth will destroy him".
The book revolves around the protagonist Chandru Ramachandran who was blessed with brilliance and good looks but what happens in his life as and when it progresses is the story.

He chances to meet Devi Bharadwaj in Bengaluru. He instantly falls in love with her. He clears triplet foundation course with ease. His family members includes:

Gayatri - Sister who is also a Doctor.

As you see, they all hail from a traditional and orthodox family but destiny had different plans for them.  After joining B.com in MLE College, he becomes acquainted with Raghav Acharya, Ajay Agarwal, Nadeem Ahmed.

The very mention of School and College life and the carefree attitude would take us back to those days. The essence of little pleasures were captured perfectly. The first Kiss with his flame - Devi and how they started seeing each other is a perfect romance narration.

While Ramamurthy, the astrologer warns Chandru against love citing Dosha in horoscope, a blatant lie gets him to be taken to the police station.

Why was that sinister plan hatched against him and by whom?

Author was really careful while mentioning the scenarios back then wherein he has mentioned the usage of Pager. You would be surprised to know that USD around that time was just ₹36

Then there were characters like Dr Nagesh, Dr Brahaspati, Dr Pandian Durairaj. Dr Pandian proposes to Gayatri who readily accepts it without bothering about the caste he is from but faces a stiff resistance from her parents, as expected. They try to get her married to another guy. As they say world is small, the same guy comes in the picture after sometime when Chandru goes to Australia.

Wait! Did I just say Chandru goes to Australia?

Yes. He goes to Australia on a scholarship and hatches a plan to become a permanent resident and take over an existing business. As they say, "what you sow is what you reap", he gets cheated by a woman who takes all of his earnings in no time.

There was a beautiful relationship between Chandru and Lauren and even it fails to take off. Though from outside, he may look like a rogue as the title says, to me, he is the hero. Of course, he is the hero of he story and the struggle he goes through was captured candidly in this novel.

So, a lie destroys his life back then and after 16 years, he gets to know something about his FIRST LOVE which devastates him further.

Read this novel to find out. I must admit that this novel has the essence of all - Love, Lust, Sex, Friendship, Treachery and most importantly, relationship. This book is not suitable for kids...

This book is available on Amazon in eBook and Paperback formats.