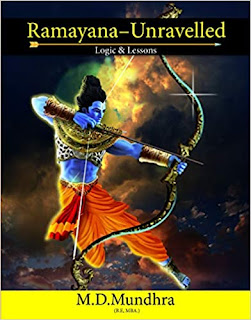 Title - Ramayana Unravelled : Logic & Lessons
Author - M.D. Mundhra
Genre - Myths, Legends & Sagas
Publisher - M.D.Mundhra for Om Namah Shivay Educational Happiness Trust
ISBN - 978-819-483-580-6
Ramayana is one of the two epics which Hindus revere the most. It is shown on National Television and on other private channels for few decades. There were numerous books printed in various languages across the globe and is being sold/circulated. Some of the authors have even gone a step ahead to decipher their connection to various other things which this Earth has to offer. One of them is Logic and Lesson which is associated with it. This is done with ease by M.D.Mundhra (though I am sure that he would have spent a lot of time in getting this done and we read it to grasp what it has to offer).
I was blown over by the cover page and the concept. I started reading it nd found myself absorbed in the beauty of so many lessons which this great epic could teach and make it fresh as I started reading about this epic only yesterday.
If you boast about knowing Ramayana, in and out, there are few things which would make you think twice. For instance, who saved Laxman from Parashurama?
Do you know that Surpanakha's husband was killed by Raavan?
Do you know what curse did he get for trying to get hold of Vedavati and Rambha?
The book is certainly a classic since it takes an approach to a different dimension altogether and would even make it a strong point to confirm that this has taken place in reality.
The logic and lesson which the author wanted to point out by connecting with the epic is given in bold letters which makes it easier for the reader to understand and grasp the concept. I must say that this attempt is breathtaking. The seamless integration of these lessons in an epic would be possible only with those who have a deep and complete understanding on Ramayana coupled with Management skills without which this kind of an output is simply not possible...
Some of the pointers I would like to highlight it here are given below:
1. No boons can eve change the Universal law of cause and effect.
2. The intensity of pain inflicted by your own relatives and friends is many times more than the similar pain inflicted by strangers.
3. Kundalini Power - there is jut a reference since author says that it is too vast a topic to define in this book.
4. Befriend those whom you cannot fight - When Raavan makes a friendship pact with Bali.
5. Artificial Insemination - which enables King Dasaratha to become a father of 4 sons through his 3 wives
This book has many such interesting logic and lesson till the end. This is surely going to be a readers delight.
I must also mention here that the book has some interesting charts. Do not forget to read " The Basic Concepts" before you delve deep into the book. If you're a pious Hindu or a Management Student or Both, this book is a MUST READ..
This book is available on Amazon