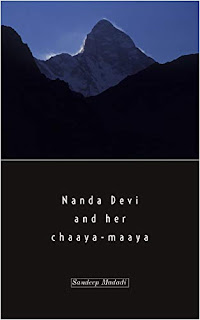 Title - Nanda Devi and her chaaya-maaya
Author -Sandeep Madadi
Genre - Non Fiction(Climbing and Mountaineering)
Publisher - Amazon Kindle
ASIN - B08CZVCVPF
A different genre I had come across in the recent times. This is a memoir of the author who is interested in climbing and mountaineering and he has brilliantly combined his experiences with the real life stories of prominent British Mountaineers.
While we always talk about the summit of Mt. Everest, not much is spoken about the much tougher peak to summit - Nanda Devi. Since this is entirely in the Indian sub-continent, it can be considered as the highest peak in India surrounded by mighty Himalayan ranges.
Though this is just a 70+ pages book, the content is intense and the way author has described his experience is simply amazing. One could relate to it very well, if he or she has been into mountaineering. Sandeep rightly says that this book is not about how such a hostile mountain was conquered but he story of a resilient mountain tribe who never gave up in the face of all adversities attributing any good luck to the grace of their patron goddess and misfortune to their fate
Chronology of events - do not miss itI was thrilled by the Chronology From 1976.Ruttledge attempted to penetrate three times and failed, said 'a place only about seventy-five miles from Almora, yet hitherto more inaccessible than the North Pole' - shows the might of this mountain which is unexplainable with scientific terms/means.I am reproducing the same lines as it is from the book for your interest and understanding which reads as "Nanda Devi which means 'Bliss giving goddess' is widely believed by locals to be the manifestation of goddess Parvati, consort of Lord Shiva and its summit, her abode. Just short of 8000 meters, it is the second-highest mountain in India, standing at 7816 meters (25643 ft). But technically speaking, as Kanchenjunga is located on the border of India and Nepal, Nanda Devi is the highest mountain which is entirely located inside India; her snow- draped twin peaks connected by a two-mile knife-edge ridge; slightly higher 'Nanda Devi Main' with her twin sister 'Sunanda' popularly known as 'Nanda Devi East'; notoriously technical and avalanche-prone, 7434 meters (24390 ft) peak. If Everest fame Tenzing Norgay had said that the hardest climb of his life was 'Nanda Devi East' not the Everest, now that's saying something!"People say that seven steps leading to heaven (tread by Pandavas) are visible from the Satopant lake in the majestic ChoukhambaDo you know the significance of “Nilkantha”?We survived the scare of landslide and were on our way to Lata, enroute Joshimath. Maybe, we had just passed the first litmus test posed by Nanda Devi.There is a mention about Skeleton LakeShipton’s expedition is something you wouldn't want to miss.“Death is not too high a price to pay for a life fully lived," wrote Devi’s activist mother as she reflects on the life of the father-daughter duo.Do you know what is special about Mahadev Mandir in Niti?Shipton who said, "A lifetime is not enough to absorb the wonder of that country." When you finish reading this book, you wouldn't disagree with his views. Great Narration coupled with real life experience makes this book more appealing. Happy reading!!
This book is available on Amazon