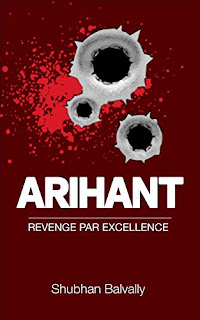 Title - Arihant : Revenge Par Excellence
Author - Shubhan Balvally
Genre - Fiction
Publisher - Amazon Kindle
ASIN - B07PZ3BWY4
Prof Ramanna invents Antitox which helps in detecting accurate level of contamination in the food by just incorporating this chip on a microwave oven. He gets worldwide acclaim because of this and gets prestigious award too. He was considered as "Father of Modern Technology" and during the felicitation function, he hits that he has come up with another modern innovation which, when added to the Indian army would give super powers and would put us up in the BIG League thereby rubbing shoulders with the likes of USA, China and Russia.
While he decides to dedicate his invention to the nation on 15th of August, he gets attacked by a syndicate which includes businessmen Madan Kalra, Xavier Dias, Ali Asghar, Raj Shekhar and Ranjit Shetty. Even though Ramanna had deployed Sentinels from the elite Futuristic Vigilante Services Ltd, none of them including the Professor survives.
Did the syndicate manage to get hold of his invention?
If yes, what was the invention all about?
The story has some traces of gist from a famous Hollywood movie though this tory perfectly fits the Indian scenario.
Though this is a short novel, it is fast paced and keep you hooked till the end.
The story takes a sudden turn when the business honchos starts getting killed. ACP Anand was given the task to get hold of the murderer. He is ably assisted by Inspector Arvind Digvijay Sinha.
Did they manage to crack the case?
If yes, who was the killer?
What was the motive behind killing?
A perfect read during your leisure time/holidays. Good attempt by the author. Loved the way the story was narrative wherein you never feel lethargic while reading the story.
This book is available on Amazon and is FREE for Kindle Unlimited.