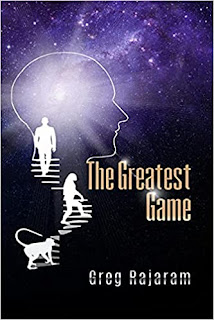 Title - The Greatest Game
Author - Greg Rajaram
Genre - Fiction
Publisher - Notion Press
ISBN - 978-1638869214
A thought provoking novel which revolves around two different timelines covering two different religion/beliefs with one binding point - LOVE!
Here is my review about this wonderful novel which is no less than a Christopher Nolan movie. The only difference is though it may look confusing initially, in the end, you would understand as to what author was trying to convey.
The novel is divided into two books.
Book 1:
The story begins with Devi and Shivaji who gets to eat the forbidden Silver Apple. They give birth to two sons Datha and Vish, While Datha is harsh, Vish was soft hearted. An unforeseen incident happens which makes Shivaji to disown Datha who goes on to become the leader of Surya tribe. Shakuni succeeds him.
Linga, who was the 3rd son establishes Mathra City. There was a default understanding that the mighty Surya empire will not attack Mathra city. However this promise is broken.
Why was it broken?
Then comes Matsya who is the grandfather of Adi. There were some real interesting converstaion between these two and Rudhra, the friend of Matsya.
I loved few lines in particular in Book 1 which I have given it as it is:

““When the first man and woman ate the fruit of knowledge, they inherited the intelligence of the Gods but it came at a terrible cost.” “What cost is that?” asked Adi, mesmerized by Matsya’s train of thought. “The paradox of choice. Being able to think for ourselves made us intelligent, but it also caused us to define our own values. And we’re lost in the deep dark depths of the ocean in trying to decide between what’s right and what’s wrong.””

This too has many characters and as a matter of habit, I make a note of all the names to avoid confusion. This story has few names like Friedrich, Louie before moving on to Venki and Maya. Krish is their son.

While book 1 happens during the historical period when the fire was discovered, this story happens wherein Diraj, the boss of Krish and founder of Cittar Technologies, tries to build Avatara which is capable of having "Artificial Consciousness".

Something was amiss most of the time, making them to taste the failure. Though they had the best of the minds who excelled in various fields like astro physics, bio chemistry, mathematics and other domain/subjects, they could not add that particular element to invoke Avatara.

Krish who was in love with Simran during their adolescent age was not reciprocated with his unconditional love when he approaches her again after being placed in Cittar.

Did Krish manage to win in his quest - of Love and invoking Avatara?

Read this amazing novel which would make you dive deep into various thoughts which is not only powerful but an enlightening one.