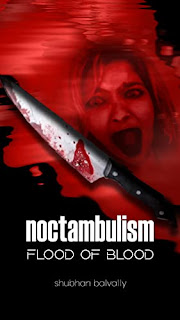 Title - Noctambulism : Flood of Blood
Author - Shubhan Balvally
Genre - Fiction(Crime Thriller)
Publisher - Notion Press
ASIN - B09WV2GXRG
A beautiful and entertaining crime plot that would keep you hooked until the end of this book. The story begins with the introduction of Pinto brothers of Goa who struggled their way out to amass a fortune. Lazarus Pinto was the elder brother who was married thrice. His first wife was Monica and through her James and Joachim were born. The second wife was Magdalene and through her, he fathered identical triplets - Sylvester, Salvador, and Samantha. The third wife was Amanda Moreas and through her John, Joseph and Elizabeth were born.
Lawrence was his younger brother who was married to Natalia Borges and fathered Michael and Mathew through her. Natalia's father was Vilander Borges who was the President of the All Goa Toddy Tappers Association.
Pinto brothers had a troubled childhood since their father was a drunkard. They set up Pinto Exports and later invests in Devant Bicholim Mines which flourishes bringing them a huge fortune. This leads them to purchase Bat Island aka Pequin Island in which a beautiful mansion was built. The description to narrate this sprawling estate was splendid. It gives a detailed description of how this property is. It was named Nona Nuvem which when translated into English means "Cloud Nine". Yeah, I learned a Portuguese word :-)
In total, there were 17 members of the Pinto family. I felt the characters were way too many making it difficult to remember initially but as I started reading the novel, it synced perfectly. Moreover, author was kind enough to mention these characters separately in the very beginning.
During the annual celebrations before Christmas/New Year, all of them were invited including the extended family members which included Melanie Fernandes who was the elder sister of Natalia. She along with her kids Melwyn, Anil and Anita reach the island. Then there was support staff on the estate.

Everything was going fine until when "The Will" was announced by Martin Furtado, the lawyer of the Pinto. The will be bequeathed as per the below-mentioned percentage for each of the heirs.

After this, a series of murders commences.

Martin Furtado, the lawyer of the Pinto family gets killed first.

James gets killed soon after Monica.

Natalia was next. Killer jumped the theory of The Blood Hounds who predicted that Joachim would be nex

The revelation of Natalia's kids as "The Blood Hounds" who were detectives adds spice to the story as they start investigating these murders to nab the culprit.

Then there was some romance added to the novel.

Initially, when I started reading this novel, I found some similarities with the yesteryear movie in Tamil called "Athey Kangal" but as and when the story progressed, it was a different plot altogether and when the real culprit is tracked, it would send you in for a shock since this novel has few unexpected twists. I am sure you would enjoy thoroughly reading this. Pick your copy today.

This book is available on Amazon in eBook and Paperback formats.